Whose #FeesMustFall is it anyway? 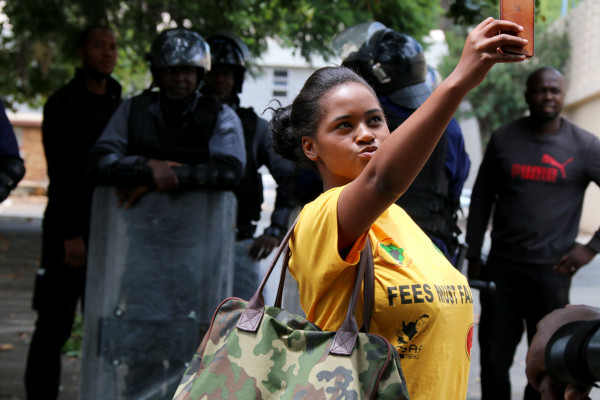 SELFIE TIME: Students who have come to register take a moment for a selfie with hired private security. Photo: Michelle Gumede

Ok, so you’ve been seeing some pretty shocking news coming out of the university over the last two weeks. While you know that the protest is a continuation from last year’s #FeesMustFall protests, there are certain things that are going on that you just don’t understand.

The good news is, we are here to help you. We have complied a list of questions and answers that can make understanding these protests a little bit easier for you.

Who are the students protesting?

The students that are currently involved in the #FeesMustFall2016 protests at Wits are some members of the Student Representative Council (SRC), the Wits Fees Must Fall (FMF) movement–who say they are non-partisan–and other students that are not part of the two groups. Even though the workers at Wits aren’t on strike, they have been protesting everyday this week at lunch time in solidarity with the students.

Why are they protesting?

The protests are about, among other things,  the need for all students, particularly those from previously disadvantaged backgrounds to have access to free quality education, that the registration fee be scrapped regardless of previous debts that they have incurred, that the upfront fee for university accommodation be scrapped and that international students that come from Africa be allowed to start their studies by paying only 20% of their entire tuition cost instead of the expected 75%.

What does this now mean for registration?

The registration process was meant to begin on the on January 11. But due to the ongoing protests on campus, they were postponed on January 12 and they resumed the following day. Registration has officially resumed however with a heavy private security presence guarding the registration venue, Hall 29.

When is this protest going to end?

It does not seem as though the end is in sight anytime soon. Students are still protesting on campus and they are demanding that the university stop ignoring them and begin to engage with them on the demands they have tabled. Until that happens, the students on Wednesday afternoon said they would take their protests into the forthcoming local elections saying: “No Free Education, No Elections”.

I’ve been watching Twitter and it looks like Wits SRC and Wits FMF have beef. Whose #FeesMustFall is it anyway?

There are some tensions between the Wits SRC, dominated by the Progressive Youth Alliance, and Wits FMF movement. The bodies even released two different, competing statements over the course of the week. Wits SRC members were also kicked out of a meeting by Wits FMF meeting for allegedly causing a disruption, an accusation the SRC denies. However the Wits SRC has been tweeting that they are for the #FeesMustFall. Likewise, Wits FMF has made it clear that they respect that the SRC is a democratically elected body, that is meant to represent students. However, Wits FMF is adamant that there will be times when both parties will have to work independently and that if the SRC wants to join in, they can only come as ordinary students to a non-partisan movement.

I thought students won last year, is there still a need for #FeesMustFall protests?

The diplomatic answer at this point is that you decide. In your decision making however, tread carefully and consider all sides of the discussion. However, here is some food for thought:

Will the university’s calendar be disrupted?

At this point its a little too early to say. This will be determined by the length of the protests and the university’s reaction to them.

We hope this clears some things for you. We will keep updating you with any new developments as they come up.