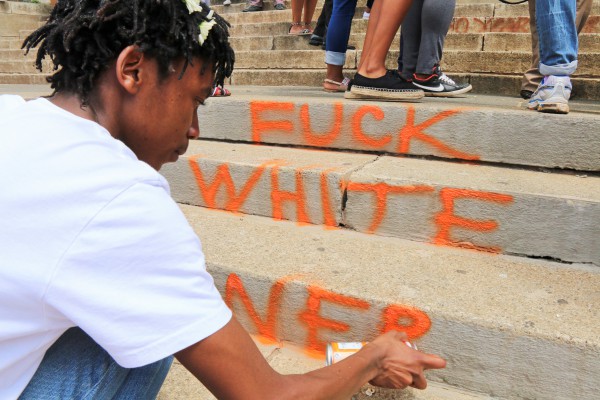 THE WRITINGS ON THE WALL: The words “Fuck white power” are sprayed onto the Great Hall staircase. Graffiti messages have popped up all over campus. While some find them offensive, the colourful messages express how some students on campus feel about power. Photo: Michelle Gumede

WITS University seems to have noticed the graffiti around campus and, in a performance of horrifying moral indignation, has sent out emails to all students condemning it as a form of vandalism. The email that the university urgently sent out proves shockingly ignorant to the content and the conversation that the graffiti was attempting to initiate. The university has, for a long time, consistently and tenaciously silenced and neutralised certain forms and articulations of protest. The university has been arrogantly denying students the space to participate in meaningful political action and active demonstrations that could potentially engage the fundamental problems in any substantial manner, or even at least attempt to alter the material conditions. Wits demonstrated this when it invited military-like private security to deal with students who were raising legitimate questions about the access and commodification of education. The university was more interested in the form in which the questions were raised instead of responding or at least acknowledging the substance of the questions. Through its actions and decisions Wits has criminalised certain ideas and modes of thinking.

If at all we are interested in understanding the intentions of the ‘vandals’ then it becomes necessary that we broaden the restrictive definition of protest that university has imposed on us. Protest comprises of both the material and symbolic and in most cases less emphasis is put on the latter. To protest is to resist against a discomfort and one cannot dismiss the efficacy of graffiti as a voice and medium of expression for marginal movements that have not in their favour traditional, established and dominant media outlets. The forms of graffiti at Wits could at the very least be considered of strategic importance as means by which it has been able to elicit responses from management. This alternative method of ensuring responses to the graffiti effectively allows for a possibility of a discussion that could potentially culminate in a substantive interrogation of the content of these expressions, which arguably, could be linked to arguments and critical analyses that identifies the university as anti-black and antagonistic to the poor and marginalised.

The graffiti connotes the existence of an activist. The graffiti stops being just vandalism but it becomes an assault against a dominant culture, a culture of silent protests and boardroom negotiations that have not changed anything. The graffiti reveals an emerging movement that is uncomfortable with and existentially displaced in relation to the university. Those that speak against the graffiti are not only repressing the act because of the message it conveys but more importantly could be seen as another reactionary attack on its symbolic dynamic. The graffiti symbolises a culture of resistance. It is a form of art that rebels existentially against the current order by brazenly confronting power. In the end, graffiti is sticking a middle finger at the university. It brutalises the sensibilities of management by effectively becoming a threat to what is most dear to them – order and suppression of an untamed radical voice.

The graffiti demands nothing and everything. The desperate attempt by the university to challenge it is obfuscating the intentions of those who have decorated the dull buildings of our campus with spray paint.

Mbhele is an activist and a Law student