Wits University students were evacuated from an inter-campus bus after it was “deliberately” set alight outside the Knockando residence in Parktown on Wednesday night.

Apparently, students and the bus driver reported smelling petrol in the vehicle while enroute to Knockando. At the stop at the men’s residence, the driver discovered a fire on the back seat of the bus. He attempted to stop the fire with an extinguisher but the bus was eventually engulfed in flames.

Lucky Khumela, Wits Crime and Prevention Liaison manager told Wits Vuvuzela that the cause of the fire is most likely arson.  According to Khumela who was at the scene while the bus was burning, the incident is “absolutely foul play”.

Khumela also insists that the bus had no mechanical fault as the fire started on the back seat of the bus.

The bus was removed from the scene by early this morning with only some ash and debris left to tell the tale of the night before. 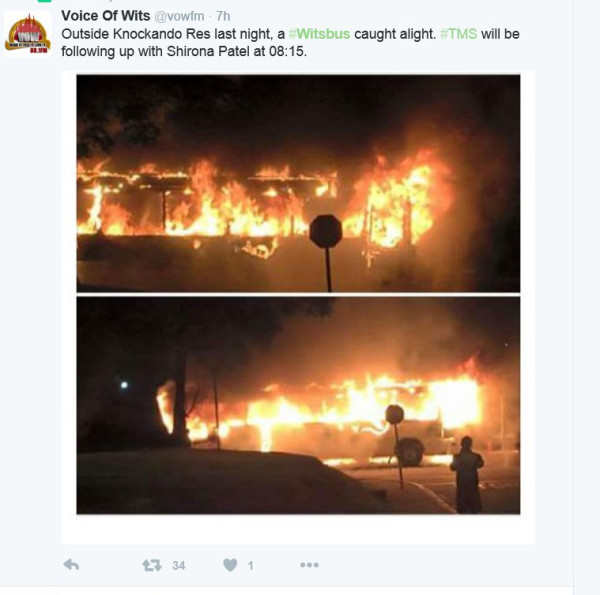 Wits SRC general secretary Fasiha Hassan says the SRC (Students Representatives Council) rushed to the scene to support students who were on the bus when the fire broke out. “We condemn acts of violence that put students in danger,” says Hassan.

The university confirms it has opened a case at the Parkview police station but no suspects have yet been identified. According to Wits Communications manager, Shirona Patel, the surveillance cameras outside the men’s residence were not pointed directly at the bus when the fire started.

The free inter-campus bus service runs daily from main campus to all residences from 6.30am until midnight during the week. The bus services have continued to operate normally despite the incident. A statement from the university indicates that additional private security police have been deployed on campus as a result of the fire.

“We’ve got a commitment to our students and to the Wits community to make sure the academic program continues normally,” says Timothy Mudau, operations manager of transport at Wits.

Although no suspects have been identified, Wits university management says this act directly violates the court interdict obtained by the University. They have also threatened to immediately suspend the culprits, should they be identified as students.

“People may have been killed, even the driver. This is one of the most heinous crimes which can easily be linked with gross insubordination, considering an applied Protection Order,” Khumela says.