The Wits SRC has managed to raise between R3.5-million and R4-million towards its R10-million access campaign that it launched earlier this year. 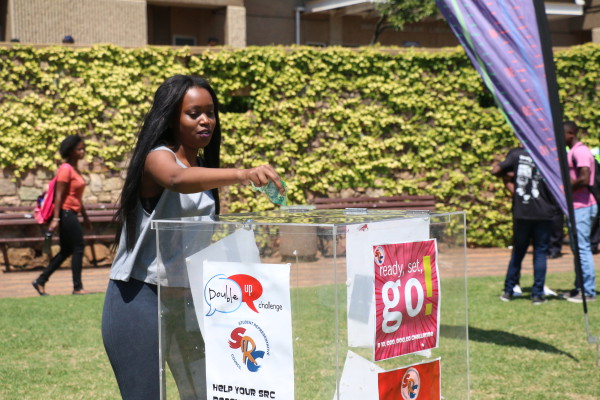 Show me the money: A student donating towards the #Access campaign last month. Photo: Tanisha Heiberg

The campaign came about as a result of the SRC realising that students who fell in the “missing middle” category – students who don’t qualify for NSFAS but still cannot afford their fees – need to be assisted.

According to the SRC’s general secretary, Fasiha Hassan, they will extend the campaign “because a lot more needs to be done to help potential beneficiaries.”
“Access has now been widened, we are now actively saying that access is about more than just tuition fees,” said Hassan. The campaign includes a more “holistic approach” to assisting students in need. It will feature ways to assist students with accommodation, food and academic support in order to try and help students to complete their degrees.

The SRC is hoping to launch an sms line where people who are interested in donating to the cause can sms the word “Access” to 42167 and this sms will enable donors to give R30 towards the cause. The details of this line are still being sorted out.
“We have a very big pledge line that we are going to have on the 17th of March. We are working with DSTV channel ITV, having it sponsored by Stumbo Pops and people phone in and say ‘hey this is a great cause, I’d like to pledge R5 000.’ This becomes a way for people to donate,” Hassan said. The pledge line will be open from 8:30pm to midnight.

Hassan said rumours that the campaign would only benefit a few students were incorrect. “We have decided on a bottom-up approach … so the idea is not that we fund five or 10 students fully, let us do some analysis, let’s see how many people have waivered, let’s see how many people have accommodation and see how we help them,” she said. These students that receive partial assistance will be assisted to get other funding as the year progresses.

According to Hassan, as of last week there were about 9 000 students that had signed waivers. Hassan said this number was before NSFAS appeals concluded and that the number has possibly gone down. “We’re hoping the number will go down, we’re waiting for a detailed report from finance,” she said.

The campaign is prioritising undergraduate students in order to help them finish their degrees.