By Thembisile Dzonzi and Michelle Gumede 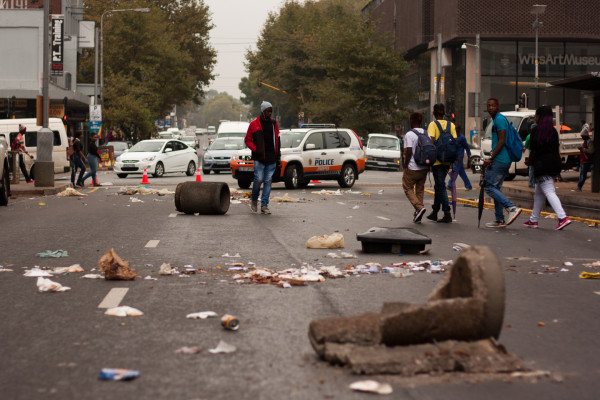 CHAOS IN THE STREETS: Pedestrians navigate their way through the debris left after the Pikitup workers strike this morning. Photo: Kyle Oberholzer

PIKITUP workers took to the streets of Johannesburg in continued protest action but it turned violent with protesters throwing rocks at bystanders.

The protest started on Jorissen Street at around 10am with striking workers marching down the street and tipping over dust bins. According to protesting Pikitup workers  they were promised salary increases in December, which they still have not received.

Pikitup spokesperson Jacky Mashapu called the strike “illegal” and said he did not know exactly why it was taking place “but from what I have gathered the workers are unhappy with the resolution made by all parties.”

Earlier, as the protest started, Rosebank college students were overlooking the protesters but were showered with rocks after some of them allegedly heckled the workers.

A bystander from the college told Wits Vuvuzela, “we were looking over at them from the balcony but they started throwing rocks at us from down there”.

Protestors threatened to take a Wits Vuvuzela journalist’s camera saying that the photojournalist would be beat up if she filmed. They also said that they did not want to be filmed and would take anyone’s phone whom they caught filming the strike action.

“They’re going to hit you if you don’t put away your camera,” the protester said.

Police officers on the scene who said that they were not aware of the strike or the protest until distress calls were made out to them.

An altercation between the first police officers on the scene took place as the officers tried to prevent the protesting crowd from hurling rocks at the students and other bystanders.

Johannesburg Metro Police blocked strikers from entering Jan Smuts Avenue but the crowd continued to march up and down Jorissen and De Korte road anyway.

Last year Pikitup workers embarked on a wage increase strike where they demanded their salaries be increased from R6 000 to R10 000.

“We as Pikitup have activated our contingency plan and promise to have the city back in order soon,” said Mashapu.

Wits Vuvuzela contacted the SA Municipal Workers Union for comment but did not receive a response as of publication time.