The short lifespan of the black mannequin 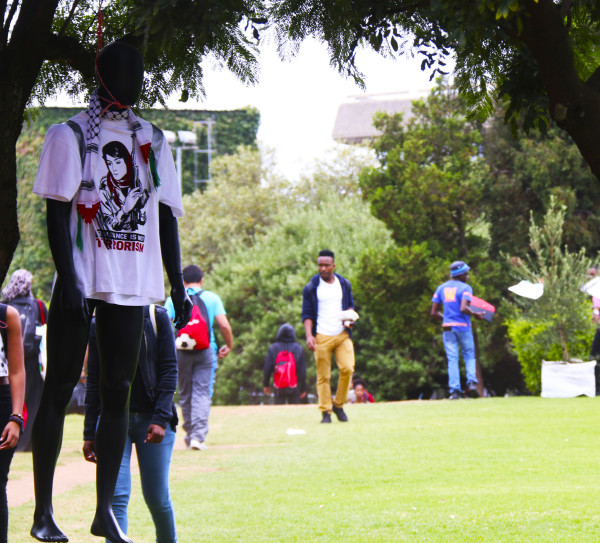 STRANGE FRUIT: The black mannequin that was hanging on a tree at the Wits Lawns during #IsrealApartheidWeek was swiftly removed after outraged by its insensitivity. Photo: Zimasa Mpemnyama

ON Tuesday, a picture of a black mannequin hanging by a noose from a tree at the Wits Library Lawns, made rounds on social media. The image was retweeted more than 600 times with Twitter users expressing outrage at the image which they said resembled the lynchings of black men in America.

So, a friend’s bf just sent us this. They just saw it at @WitsUniversity pic.twitter.com/Atx5SSl4bC

The mannequin was hung late Monday night with clothes and placards but was discovered the following morning undressed.

Arriving on the scene almost an hour after the picture went viral, Wits Vuvuzela was told by SRC general secretary, Fasiha Hassan that the exhibition was part of #IsraelApartheidWeek activities and represented Israel’s disregard for black lives.

The message was clearly not well received, with some students not understanding its meaning.

Around 15 minutes later, Wits PSC members came and wrapped a Palestinian keffiyeh around the neck of the mannequin along with a t-shirt with the words, “Resistance is not Terrorism.”

A little while after that the mannequin was taken down, allegedly by students who felt insulted by the exhibition.

The mannequin was left on the ground of the library lawns, in two halves. When one of the Wits Palestine Solidarity Committee students was asked what happened to the exhibition, he replied: “It wasn’t received as we had wished.”

On Wednesday night, the Wits PSC released a statement apologising for the exhibition.