Wits University has ‘indefinitely’ suspended three students that have been part of on-going protests on the campus. 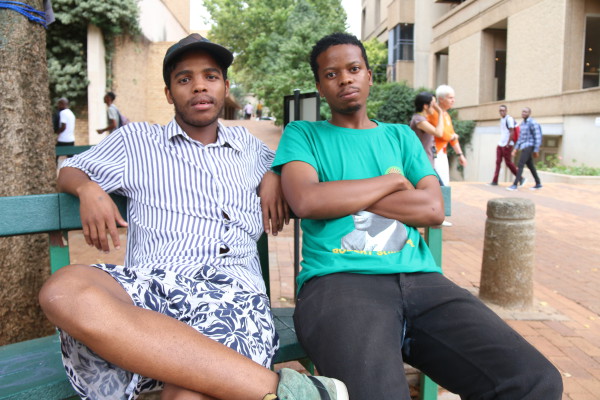 LOCKED OUT: Students, Tlotliso Makhoba and Zama Mthunzi (Left to Right) who have been suspended by the University pending an on going investigation.           Photo: Zimasa Mpemnyama

Three #WitsFeesMustFall students have been suspended “indefinitely” and are not allowed on university precincts or to participate in activities including having access to their residences and classes pending an investigation.

The students’ suspensions are related primarily to a #WitsFeesMustFall occupation of Solomon House (Senate House) which stopped registration on January 11. The three are also part of a group of suspended students who have been accused of vandalism and arson including the burning of a bus and a mattress at Wartenweiler library.

Makhoba said he was served with papers to appear before Deputy Vice-Chancellor Andrew Crouch 45 minutes before he was due to appear for the hearing on February 19.

“It was 4:45pm and they told me that Crouch wants to see me at 5:30pm. They found me coming back from West [Campus] and Campus Control was like ‘We are serving you’,” said Makhoba.

Campus Control told him they had been looking for him the whole day and they escorted him to Crouch’s office.

According to Makhoba and Mthunzi, Makhoba was not present during the day of the #WitsFeesMustFall occupation. But during his hearing in Crouch’s office he was told there is video evidence of him at the occupation. Makhoba said the Wits Legal Office has refused to show him the video evidence since the hearing.

“They told me that this is a full suspension and they will investigate. On the tenth day they said we will have a hearing,” Makhoba said.

“Last week Friday was the tenth day. I go there yesterday [Monday], I went there and I spoke to the lawyer of the university, Aidan [Mylchreest] and I asked him ‘My hearing was meant to be Friday, what’s going on?’,” said Makhoba.

“I’ve been thrown out of lectures, not physically but the lecturer would stop the lecture and tell me to go out,”

Makhoba said this is when they told him that his suspension was indefinite and the investigation was still continuing.

The other suspended student, Mthunzi, said that he has been locked out of his room at Esselen residence and his clothes are locked inside his room.

Makhoba, who is waiting on his NSFAS appeal, said the suspension has meant he constantly has to beg security to enter campus so he can sort out his funding issues.

“I told them when they suspended me that I am waiting for my appeal and I need to fix issues of accommodation. They were like ‘no, those things don’t matter. You will see those things when the suspension has ended’,” Makhoba said.

Makhoba said he has already missed two tests as a result of the suspensions and Mthunzi has been removed from lectures.

“I’ve been thrown out of lectures, not physically but the lecturer would stop the lecture and tell me to go out,” Mthunzi said.

The students feel that their indefinite suspension is harsh and that the university is targeting them.

When asked for comment, the Wits Legal Office referred all comments to Wits communications officer, Shirona Patel, who responded with a statement from February 23 which reads, “seven students have since been barred and/or suspended or partially suspended from our campuses.  These incidents have created a need for heightened security on our campuses, in order to protect the safety and security of our staff, students and visitors.”

When Wits Vuvuzela visited Mylchreest at the Legal Office for more in-depth comment, Mylchreest said he had to confer with a colleague about whether he could comment. He later sent an administrator that referred Wits Vuvuzela back to Patel.