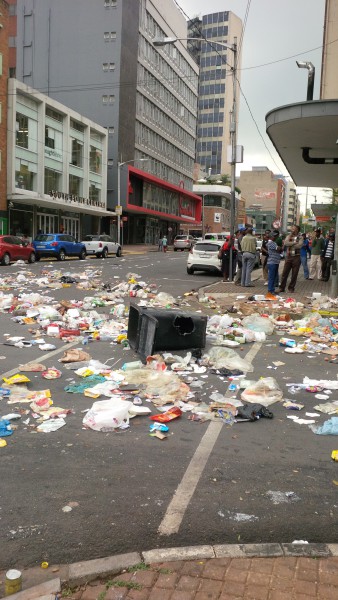 Pikitup employees have ensured the streets in Braamfontein are strewn with rubbish during their strike. Photo: Nobathembu Zantsi

Pikitup workers took to the streets of Braamfontein Friday afternoon demanding their salary increases which were promised to them in December.

Workers say the promised salary increases have not been implemented. A striking worker who did not want to be named told Wits Vuvuzela, “We want our salary to increase from R6500 to R10 000″.

The striking workers made their way to the City of Johannesburg offices on Friday as workers were adamant that they speak to Johannesburg mayor Parks Tau. James Toto, a shop-steward said, “We sent a memorandum to Pikitup but they are ignoring us now we want the mayor Parks Tau to intervene”.

Police were called in to escort City of Johannesburg workers off their premises as the striking workers were carrying sticks while leaders of the strike were allowed onto the premises. Attempts to speak to the mayor failed as workers were told he was not in the building.

The striking workers have taken a resolution to continue take their strike to SAMWU (South African Municipal Workers Union) offices in Gandi Square on Tuesday, March 22, 2016. Attempts to get comment from a representative from the City of Johannesburg failed as the spokesperson Nthatise Modingoane had left the building according to the receptionist and her phone rang un-answered.