The Netexplo Grand Prix award recognises any global mobile app that is leading in the digital innovation field, and is chosen by 200 experts from around the world. The organisation initially chooses 2000 projects to contend for the award, which are narrowed down to 10 finalists over a five-month process.

The app serves as a translation platform, translating between any of the 11 South African official languages. Aweza uses a crowd sourcing function to collect phrases and audio for pronunciation purposes in all the languages. Users are rewarded for contributing through gamification, which allows them to see their names climb up the leaderboard on the application. 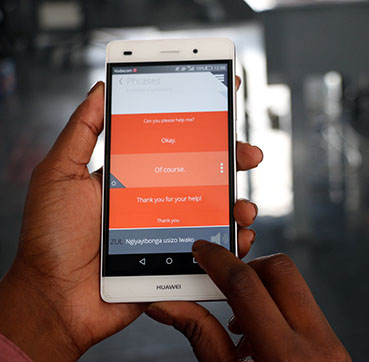 PROUDLY SOUTH AFRICAN: Aweza translates between any of the 11 South African language, including English and Zulu.

“Aweza was born as a social upliftment initiative to embrace technology, both mobile and web-based, in order to bridge the language and cultural divide that we experience in South Africa,” said 27-year-old Glenn Stein, inventor of Aweza, at the award winner’s Netexplo presentation in Paris.

Aweza got the nod for successfully implementing community crowd sourcing and for efforts in communication improvement in South Africa, mainly in the education sphere. Aweza was recently bought by educational technology company, Fast Maths, a company “that strives to enable all students to reach their full potential”, said Stein.

Using the Fast Maths platform, Aweza allows young South Africans who are not very fluent in English, to understand otherwise complicated terms in school subjects such as mathematics.

The purchase of Aweza by Fast Maths has given the app room for continual development through a bigger budget. Aweza plans to launch a bigger and better product shortly. “We want to expand our product to other countries where the same issues exist,” said Stein. “We are building a structure that allows us to rapidly scale around the world and cater to different languages with little effort.”

At the Netexplo presentation, technology expert Professor Julia Prior of the University of Technology in Sydney said, “Aweza opens up language avenues for people to connect to one another, but it is also very much about people through building up the language database and increasing the possibilities.”