Abdul Mayimele went from being a small-town boy who knew nothing about playing rugby to playing for the Wits Under-First20 rugby team. 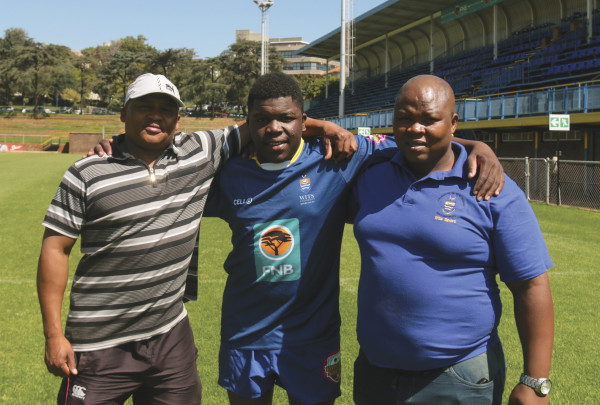 Abdul Mayimele, middle, a Wits student who has made the Wits Rugby team despite never playing the game before, is flanked by his coaches Jaco Booysen, left, and Ntsikelelo Ngcakana, right.

Abdul Mayimele, a second year engineering student at Wits University, comes from a town where few people play or even about or even playabout the game of rugby. Despite never playing the game before, the 20-year-old has just made the Wits rugby team.

“Soccer is the most popular sport and there aren’t any rugby teams where I’m from,” Mayimele says of his hometown, Tzaneen in Limpopo. Mayimele’s interst in rugby grew as a result of a woman in his neighbourhood regularly visiting his home to watch rugby on his family’s TV.

“I used to only see it on TV and I did not know that it was this different in real life,” added Mayimele.

Mayimele told Wits Vuvuzela he had tried to get into the rugby team last year when he joined Wits University but was never called back. He decided to go back again this year when he saw the team training and asked to join in. Wits coach Ntsikelelo Ngcakana praised Mayimele for being a hard worker and could not believe that he had never played rugby before.

“He still has a lot of potential in him and we believe in him,” said Ngcakana. He also encouraged any inexperienced Wits students who loves rugby and who would like to learn from Mayimele’s story to come try out for the team if they feel that they have the passion and talent.

Mayimele says that right now he is focused on his studies and improving his skills as a rugby player in the Wits rugby team but should an opportunity to play for a bigger team arise, he is willing to take it.