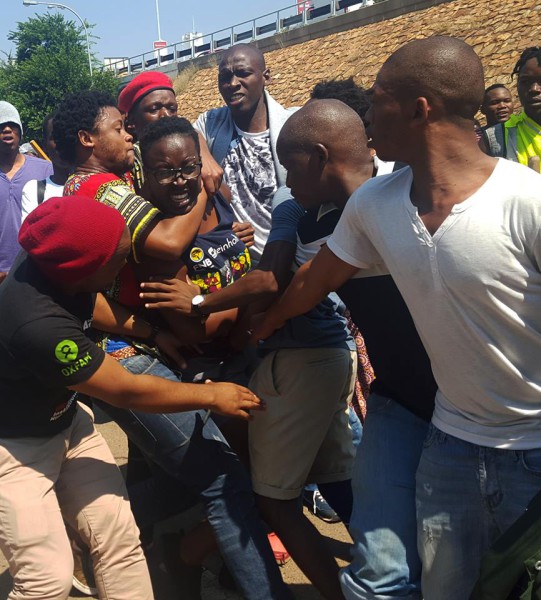 Wits Vuvuzela witnessed the female student being grabbed around the neck and pushed to the ground. The female student had accused male protest leaders of disregarding women’s contribution to the protest.

The attack took place during a protest on Monday which partially shut down Wits university.

The attack was swiftly condemned by some protest leaders. Wits Economic Freedom Fighters leader Vuyani Pambo said that black students should not fight with one another in this way and that no one should be excluded.

“No one must pronounce in our name that women cannot lead, or that queer people cannot be here,” Pambo said.

There had been other accusations that the protest was excluding women and queer people.  The Wits Student Representative Council, which is not participating in the protest, condemned this tweeting from their account: “The exclusion from the meeting is evidence of the patriarchal erasure of transgender & black feminist voices who have been instrumental #Wits”.

#RhodesMustFall activist Wanelisa Xaba condemned the attack and told Wits Vuvuzela that this was the typical treatment of women during protests and struggle movements.

“This has been going on throughout history, where men are violent towards women within struggle movements. We are here to say now that women won’t stand for it anymore or condone it. Men always try and take control of the movement. It’s deplorable,” said Xaba.