by Hazel Kimani and Tebogo Tshwane

University spokesperson Shirona Patel confirms that four chairs were set alight leading to belief that the fire was started due to arson.

A case of arson has been opened by Wits University following yesterday’s torching of a lecture hall in the Umthombo Building despite uncertainty as to the cause of the fire. 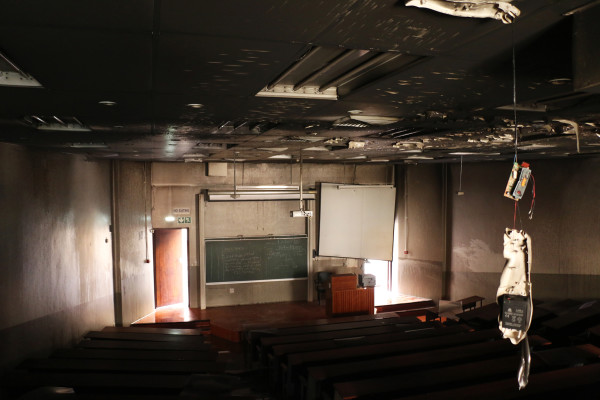 AFTER THE FIRE: The damage on the inside of a lecture hall in Umthombo building. Photo: Lwandile Fikeni

Sergeant Zondo of Hillbrow Police Station said that police were responding to a complaint from the university about the protests on campus when the fire occurred. Zondo told Wits Vuvuzela that the “arson” is likely related to the vandalism that happened during the student protest and police are still investigating the incident.

University spokesperson Shirona Patel confirmed that assessors will be on the scene today to determine what was used to start the fire and how much the damages will cost.

Patel added that CCTV footage is being reviewed to identify who was involved in starting the fire.

The empty Umthombo lecture hall was allegedly set alight while students were protesting yesterday afternoon. Private security has returned to campus and Wits Campus Control have strengthened the security at access points.

The police have also been placed around the perimeter of East Campus.

In a statement released today, the university confirmed that five students who were involved in the protest have been suspended from the institution.