Be aware, be an ally

Would you like to become an ally for the LGBT community? Sign up for the Safe Zones @ Wits programme

The Sexual Orientation and Gender Identity Advocacy Office is appealing to all staff and students on campus to join the Safe Zone Project and stand behind the LGBT community.

Project co-ordinater and Media Studies student Fumani Mabogoane is in charge of the Safe Zone @ Wits programme. Following the confrontation on campus between activists in the student movement, Mabogoane said: “who decides that queer bodies and feminists are not allowed in such spaces?” he goes on further to say that “it is such bodies that have been one of the active participants in the protests and have been the ones most helpful in mobilising support.”

Speaking earlier to Mabogoane about the Safe Zones @ Wits programme and its importance to the community because it provides a safe space where there is no fear of discrimination. Its network needs to expand because “people aren’t aware of some of the issues that the LGBT community face” he said. 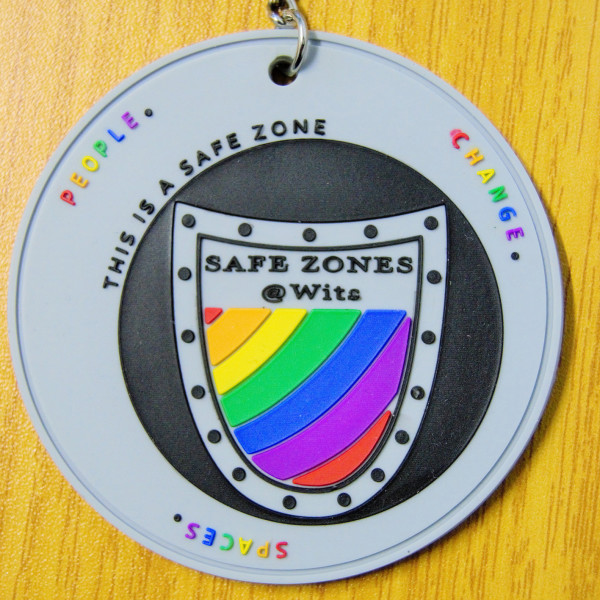 COAT OF ARMS: The Safe Zone Keychain with the shield that identifies a person as an ally once they have completed training.     Photo: Candice Wagener

The training that is provided gives the new members “Knowledge that can be extend and [be] used further than just in the university,” said Thulani Nkomo, project co-ordinator for the Wits Transformation Office.

The aim of the programme is to educate people who sign up for the training about the issues that the community faces and how to handle these issues. Nkomo said the training teaches people how to be more aware and more supportive.

Once participants have completed the training they become an official ally. Official allies receive a kit that identifies them which includes a shield sticker, keychain with the shield logo and a lanyard.

The programme calls out to any person that wants to be an activist not just in the LGBT community, but also in the social justice system of Wits. It also provides a stepping stone to help in other pillars of the transformation office or even go further and join other activist projects on campus such as Activate, Wits Pride and Ctrl alt gender.

The theme for the office this year is #OppressionDenied, a name that was chosen because of the issues the community still faces on a daily basis. “I hear of the issues that the community faces, but they would rather come to a safe zone ally than report it to the university, because there is a fear of being rejected or ignored,” said Mabogoane.

Safe zones around campus are identified by a rainbow shield sticker that is put on the front of an ally’s office door. Every door that holds this sticker, has a person inside that is committed to helping with any issues that a person from the community is dealing with. If any counselling is ever needed they will then be referred to the Career Counselling Development Unit (CCDU).