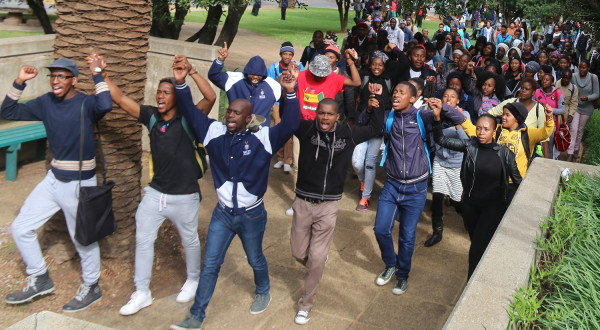 Students at Education campus took to protesting on Thursday over the lack of funding and the transparency of government bursary programme, Funza Lushaka.

Applicants of the scheme told the Wits Vuvuzela about the inconsistencies in the selection process. According to the students at the protest, a list of accepted students was released but the department failed to tell students whose applications were not successful, as well of the reasons why they were not selected.

Khensani Baloyi, a second-year student at education campus said that Funza has not been transparent with them about the application process and the selection criteria that students need to meet. “There hasn’t been any feedback on those who were declined, I for one have not received any notification on my application,” said Baloyi.

The Funza Bursary Scheme gives preference to students from rural areas as well as those who would not be able to study without the funding. However, the students claim that the bursars don’t follow up on who is awarded funding and as a result, the financially privileged students end up getting aid.

A member of the Wits Education Students Council (ESC) who wanted to remain anonymous said that management had been ignoring their pleas and the students want someone to be held accountable. She said Vice Chancellor Adam Habib was supposed to have a town hall meeting on the campus last year but it was postponed and students are still waiting to hear from his office.

“The only thing that will stabilise campus, is if we hear from our principal. As education campus, we feel like we’re the children of Habib’s side chick,” said the ESC member.

The SRC projects media and campaigns officer, Mzwanele Ntshwanti said that they met with the students on Monday to clarify that they are aware of more than a 140 students who did not receive funding.

“The students were rejected by Funza based on their subjects and courses that they had taken,” said Ntshwanti. He also said that the SRC took the list of the rejected students’ names to other government funders.

Head of Wits Communications, Shirona Patel said that the university was aware of the protests but said management wasn’t reluctant on meeting students. Patel stated that there were procedures that the students needed to follow, this includes meeting their head of faculty before meeting the vice-chancellor.

Patel further added that the university does not have a problem with protesting students but warned of a court interdict that does not protect students who disrupt lectures or prevent other students from using Wits services such as buses.