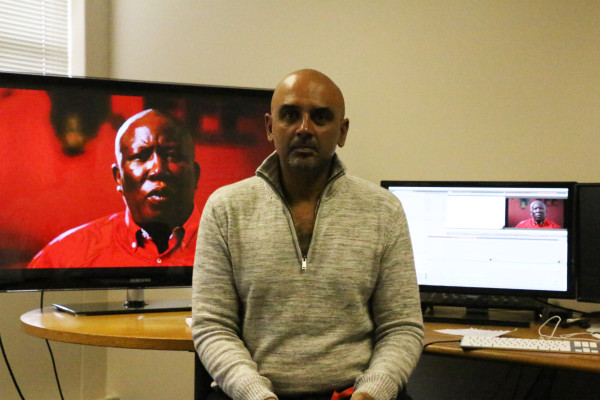 Rehad Desai, the multi-award winning filmmaker who won an Emmy for his hard-hitting documentary, Miners Shot Down, is working on a new documentary film about the #FeesMustFall movement.
The film is called Everything Must Fall and begins on October 6, 2015 — the day of action against outsourcing by a number of universities.
The film looks at Wits as a microcosm of the student movement, Desai says. This is done through intimately studying some of the actors involved in #FeesMustFall. This includes Wits EFF chairperson Vuyani Pambo, former Wits SRC president Sheera Kalla, Deputy vice-chancellor Professor Tawana Kupe and Professor Adam Habib, the vice-chancellor of Wits university.
Desai is drawn to the project by the tensions, contradictions and interior complexes in each of these actors. “Adam Habib, who I’ve known for a long time, is in this situation where he is managing some very real tough contradictions…wanting to get to a space where he is supportive of [the student] demands and critical of the government, but also sits at the head of the institution. Your student activists also need to study and have to keep themselves out of trouble. And you’ve got to find the resources to continue to study,” he says.
Desai has been focusing on what’s been happening at Wits since the birth of the #FeesMustFall movement and trying to understand Habib’s motivations for his actions. The result is a long-form piece, which he will continue filming until “probably mid next year,” he says.
While the film is primarily about the #FeesMustFall movement at Wits university it also dips into the wider movement and captures some moments of the #RhodesMustFall movement at the University of Cape Town
“In many ways that’s where it begins,” he says. “I remember the debate which was going on on social media and people saying ‘well, it’s simply a statue’ and I was arguing — including myself in this sense as an activist — that it’s where you take it; of course you can’t just stop with the statue.”
The student protests were not merely an event but a beginning of an inception of change, which gives South Africans an opportunity to interrogate decolonisation and some of the identity politics, which are coming to the fore in the student movement, Desai says.
The filmmaker traces the events that prompted the formation of the student movement to the year 2009 when the South African economy was in sharp decline as a result of the international recession.
“At the same time we were seeing rising levels of the reporting and exposure of corruption as well as the failure of black economic empowerment to have any meaningful societal reach,” Desai says.
“I think there’s a lot of disillusionment, especially with the older generation and the politicians.”
The effects of high levels of government corruption and a shrinking economy have come into sharp relief in recent years and have spurred on the student movement, which established itself on the call for university fees to be scrapped and for university workers to be insourced.
“It is genuinely acceptable for people to feel okay about others enriching themselves, becoming wealthy, as long as they feel that the route to their own self-improvement is open. Those prospects have become dimmer and dimmer for the vast majority of South Africans over the last six, seven years,” Desai says.
It is the growing disillusionment owing to the Nkandla saga, the nuclear deal and Marikana, which has radicalised young people, Desai observes.

“All these things play on to what’s happening at the universities and at Wits especially,” he says. “I don’t think there’s a better indicator of the level of fallout in society than the university and the middle class, where the people who have a real stake in society start revolting and rebelling.”
Desai hopes Everything Must Fall will be a piece that the university community and the student movement, in particular, can use to reflect on and “to initiate the discussion on their strategy, on their tactics, and wider processes”.
He is also working on a film about Julius Malema, which comes out later this year. The film is called Julius Malema vs the ANC and contrasts the rise of the EFF and its leader with the decline of the African National Congress under Jacob Zuma’s leadership.
lwandile@witsvuvuzela.com