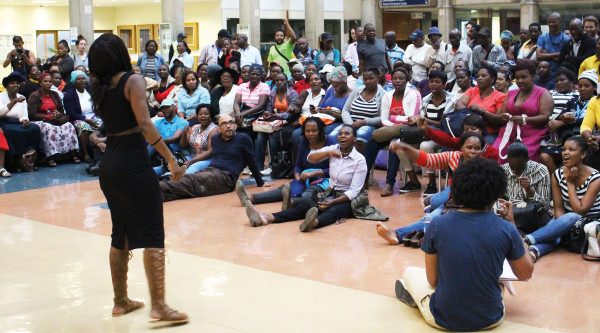 WORKERS asked for — and received — an apology from the Student Representative Council (SRC) during a meeting on Wednesday, for withdrawing from protests last year without consulting with outsourced workers.

Wits workers called a meeting at Senate House on Wednesday afternoon to address the division between workers and the SRC. It was attended by over a hundred workers as well as students and #FeesMustFall activists.
The SRC and other student groups distanced themselves from the fees and outsourcing protest last week, which partially shut down the university.
Workers said they felt that the SRC had abandoned them in their struggle.
Worker representative, Thandiswa Yaphi told Wits Vuvuzela that they wanted the SRC to apologise for pulling out of the protests last year.
“They should have consulted people and workers because when they started #FeesMustFall, they consulted with us, but when they decided to withdraw, they did not consult anyone,” she said.
SRC president Nompendulo Mkatshwa apologised at the meeting.
“We are apologising,” said Mkatshwa at the meeting.
“We are for the workers. We will continue to fight the struggle for the workers.”
Yaphi said she accepted the apology from the SRC saying, “I think it’s sincere”.
A follow-up meeting will take place next Wednesday at Senate House to further “mobilise and engage with other students who were involved in the [#FeesMustFall] struggle to talk things through”, Yaphi said.
“It will be better and there will be more tolerance among us.”