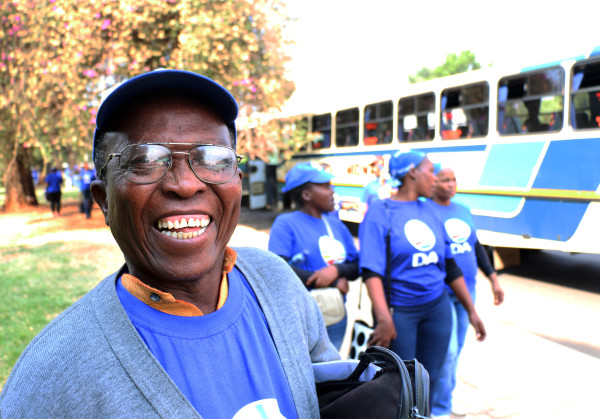 Thousands of Democratic Alliance (DA) members marched to the Constitutional Court to sound off fresh calls for President Jacob Zuma to step down.

The demonstration comes after the DA’s move to have the president impeached by parliament failed, a week ago.

On March 31 the Constitutional Court ruled that  Zuma was in breach of the constitution for refusing to adhere to Public Protector Thuli Madonsela instruction for remedial action on the Nkandla saga.

The Constitutional Court ruling had also fingered the ANC dominated National Assembly for violating the constitution by ignoring the binding remedial action of the Public Protector.

We are here to protect the constitution from the president

“This is a march to change what the ANC is doing,” said Benny Hlakotsa, a 59-year-old DA member.“We are here to protect the constitution from the president.”

“We must march until he steps down,” said Hlakotsha who is running for ward councilor Midvaal.

“Zuma must fall!” shouted a man in a blue DA t-shirt as he ambled down the road.

Other DA members were primarily at the march to show support for the DA leader Mmusi Maimane.

“What can I say? Mmusi is meant for the future,” said Sam Mashubuko, a 75-year-old DA chairperson of Ward 7 from Vanderbijlpark.

“He is not a man for broerskap. He is not a comradeship man,” he said.

Mashubuko hoped the marched was successful in rousing South Africans to action.

“We are going to mobilise for [Zuma’s] downfall,” he said.

The DA march comes several months ahead of the August local government elections where the ANC is expected to be under immense pressure from the opposition in several municipalities including Johannesburg.