The Political Art of Project Hoopoe 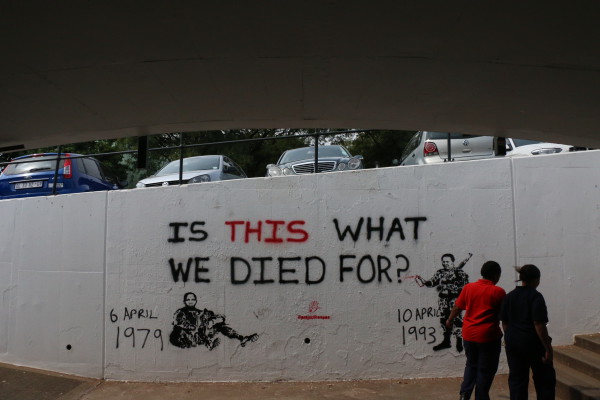 IS THIS WHAT WE DIED FOR: Grafitti remembering the deaths of anti-apartheid activists Solomon Mahlangu and Chris Hani Photo: Lwandile Fikeni

Project Hoopoe, an anonymous art collective whose political artworks have been popping up on campus and around the Braamfontein area, is here to incite a revolution one art piece at a time

“Is this what we died for?” reads a new graffiti piece by Project Hoopoe outside a tunnel that connects Wits University’s East and West campuses.

The artwork commemorates anti-apartheid activists Chris Hani and Solomon Mahlangu who were slain in April 1993 and 1979,
respectively.

Here to incite revolution through art

Project Hoopoe is an anonymous art collective, stenciling its way into the consciousness of the Wits community one art piece at a time. “Our aim is to eradicate the excuses of the uninformed on issues that should affect everyone. We are here to amplify the truth when all the lies are the same,” the collective said through a representative.

“We are here to incite revolution through art,” the collective said.

Most of their work can be found around Wits main campus and Braamfontein.

The collective was born in August 2015, a significant month for a number of reasons. “[August is] the anniversary month of massacres such as Hiroshima, Marikana and the 2014 Gaza War,” the collective said.

Project Hoopoe draws inspiration from other collectives such as Cape Town-based Tokolos Stencils – which is also anonymous. It also lists Banksy, BlkThought and Faith47 as inspirations.

“We identify with any movement that is dedicated to the plights of the marginalised,” the collective said when asked whether they identified with the #FeesMustFall movement.

“However, we are unaligned with any political party or organisation on or off Wits campus. We have worked in the past in conjunction with movements by independently creating, #Oct6, #Asinamali and Amnesty International Wits’ #WorthBleedingFor campaign art pieces – separately from the aforementioned movements’ actions.

The #WorthBleedingFor artwork can be found at the same tunnel as the Chris Hani and Solomon Mahlangu piece.

“Creating art for art’s sake is a liberal viewpoint that needs to be put under scrutiny,” the collective said.

Therefore each piece carries a message.

We don’t do it for the medals, for the fortune or fame

“Our work is therefore, to an extent, informed by the broader decolonisation discourse – but also any other discourse with a message that we feel needs to be told, whether that’s solidarity with the Palestinian struggle or highlighting LBGTQI struggles too,” said Project Hoopoe