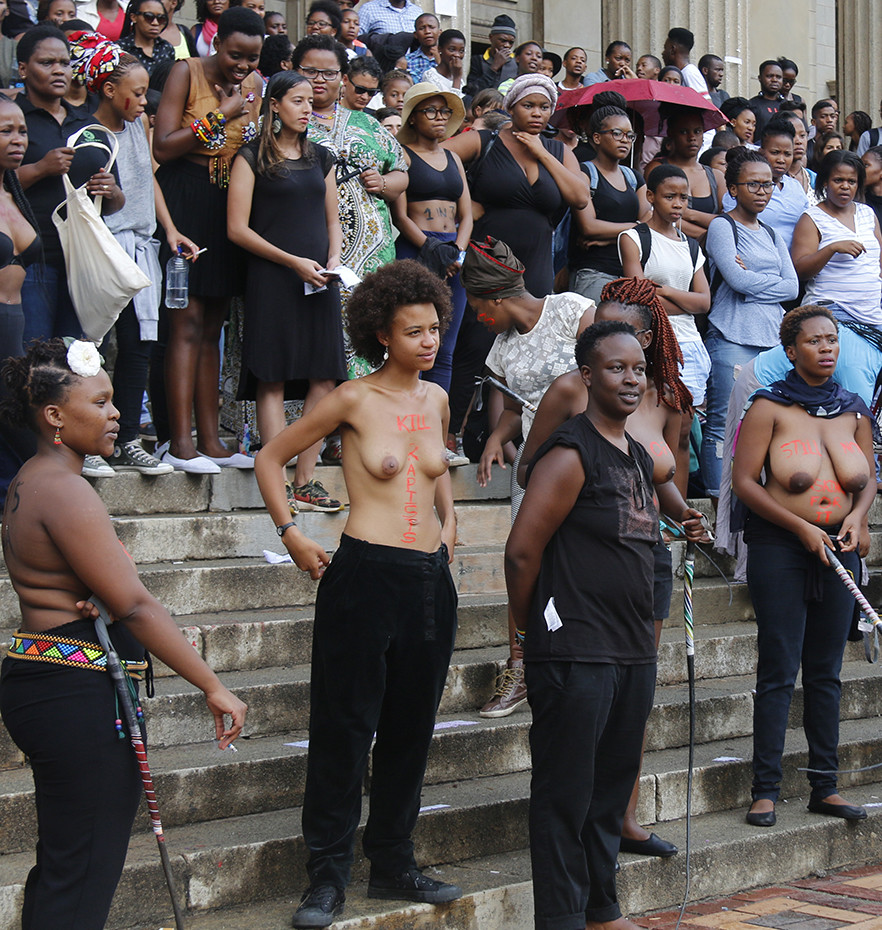 About twenty female protestors went topless in the rain at Wits University today to show their solidarity with the #RUReferenceList at Rhodes University. Many took the opportunity to share their frustrations about a system that puts victims on trial before the perpetrators.

Wits activist Simamkele Dlakavu who tearfully recounted her rape ordeal, said, “There needs to be a social cost, these men rape and nothing happens”.

The demonstration referred to as #iamoneinthree was organised by a group of women calling themselves “Wits FeesMustFall Feminists”. The event, which had a noticeably low male turnout, spoke to the statistic that every one in three women will experience physical or sexual violence in their lifetime.

The women mirrored the protests held at Rhodes last week by demonstrating in the nude to challenge the attitudes of men towards the way women dress and behave. The message was clear: whether a woman is dressed or not, she is “still not asking for it”, a slogan which appeared on the bodies of many of the protestors.

“We came together to stand against the rape culture that is at the institution, which we can also feel everywhere as women,” said Palomino Jama, a second year student at Wits University.

Thato Magano, a master’s student in African Literature, said that he was participating in today’s demonstration as a black gay man who is vulnerable to sexual assault because of the way in which society has feminised him.  He added that he believes that it is the responsibility of men to end rape culture.

“There’s nothing that a feminised, female or marginalized body can do to convince someone who has incredible amounts of privilege that what you are doing is not right until that person has come into their consciousness,” said Magano

Students reiterated that the issues of sexual violence in universities were not exclusive to campuses but were a reflection of larger society. Because the people that are the perpetrators on campus are the same perpetrators on the outside.