If by June… if the outcome is not favourable to the one that we want, ziyasha [it’s going down],” she said.

“If by June… if the outcome is not favourable to the one that we want, ziyasha [it’s going down],” she said. 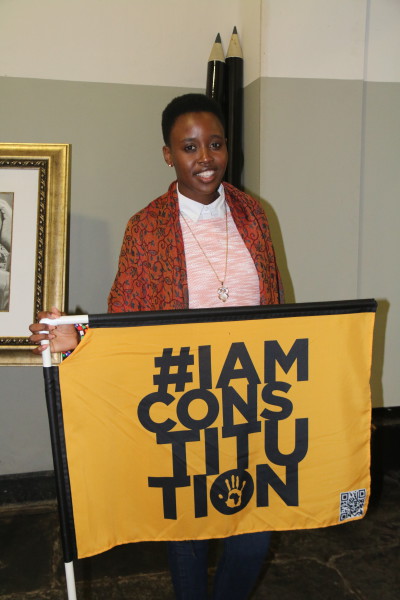 #IamConstitution: Wits SRC President, Nompendulo Mkhatshwa at the debate as one of the keynote panelists. Photo: Nokuthula Zwane

The other topics of debate were the intersectional struggles of students and the accountability of the Chapter 9 institutions.

Ramogale asked the audience on whether students “have tried to engage with the particular organ of state to get what you want?” Ramogale placed emphasis on a Constitutional democracy in the collaboration with “people, the state, the courts and the Chapter 9 institutions”.

“It is wrong for us to think that courts are the only way we can resolve our problems, the Constitution is ours,” said Ramogale.

Lastly, Dr Mathews Phosa, a veteran apartheid activist, South African attorney and politician, handed over the baton to next generation.

Phosa emphasised that getting our Constitution was a struggle. “The constitution did not fly down from heaven like manna.”

Impressed with the efforts of this generations student movements, he encouraged students further to get what they are asking for.

Phosa said he was impressed with how students were able to engage maturely with these difficult topics, saying that “every generation has defines the frontier of their struggles.” In closing Phosa said, “after this discussion I feel safe about the future of our country.”