One of the Wits University residences held a memorial service for one of the victims of the Limpopo accident which claimed the lives of seven Witsies. 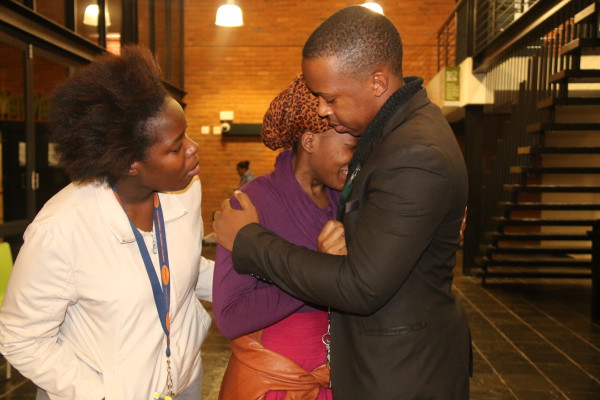 Friends of the late Joshua Mosime comfort one another at a memorial service earlier this evening. Photo by: Ayanda Mgede

Fellow residents of the Wits Junction student residence in Parktown gathered earlier this evening to commemorate the life of one of their own, Letlhogonolo Joshua Mosime, one of the victims of the Limpopo taxi crash.

Mosime, 3rd year Mechanical Engineering, died along with seven other Wits students as they returned from a religious gathering in Limpopo this past Sunday.

The prayer session honouring the student known to many as “Pascal”, was attended by the Junction House Committee, residents and a few of Mosime’s friends and church mates.

Thabang Raganya, who met Mosime through their bursary program remembered Mosime as a soft-spoken person.

Raganya said that he and the deceased spent 2013 building and trying to understand their faith.

“Joshua understood where he needed to be spiritually but I also like the fact that he knew how to have fun when he got to university yet still kept his faith intact,” he said.

The Director of Campus Housing and Life, Rob Sharman addressed the students before reading a few words of comfort. Sharman said it was important for students to remember the life that Mosime lived and celebrate it.

In a statement released earlier today, Wits University confirmed that a delegation remains in Mokopane where the accident occurred. According to the statement, four of the six surviving students have been moved to Johannesburg’s Charlotte Maxeke Hospital.