Body suspension is a type of art form where rods and hooks are placed into the skin before you are lifted up and suspended from a rig into a position of your choice. Lucia Martinengo shares about her first experience.

Suspended about one meter off the ground with hooks protruding from her back and both knees, Lucia Martinengo hangs in the shape of a scorpion while she gently sways from the hooks pulling her skin.

Her face has a look of contentment rather than discomfort, positioned elegantly as she takes on the role of the scorpion.

Martinengo, a psychology honours student, is partaking in the art of body suspension, where rods are pierced into the skin and a person is hung from a rig into different positions of varying heights. Once suspended she looks like a scorpion or as though she is flying.

“I was nervous for my first time, because of the stories people tell you, but if you prepare your body you’ll be fine,” said Martinengo.

“I had two thick hooks placed in my back and two smaller hooks for each knee, which was six piercings in total.”

Svend Jensen, a body suspension specialist of 18 years, says that thin tube like piercings, called rods, are put through the skin and used to hook and suspend.

“I’ve always wanted to practice suspension, I wanted to be the first and I did it without help based on ideas from my own research on the art,” said Jensen.

In 2013 Jensen was part of a crew that suspended 13 people from a giant rig to form what was called the “human chandelier”.

“Prepping for this gig took place in my backyard where we would suspend the people partaking from the tree in order to prepare their skin, mind and body for the chandelier,” said Jensen.

“We did about 50 suspensions over a few days in prep,” said Jensen

Would you consider suspension?

Suspension is not something that many people are interested in doing, something that Jensen attributes to “a lack of interest and knowledge that the public have on this tame art form.”

“The people that want to do it don’t have the money and the people that do have money would rather buy like a PlayStation,” said Jensen 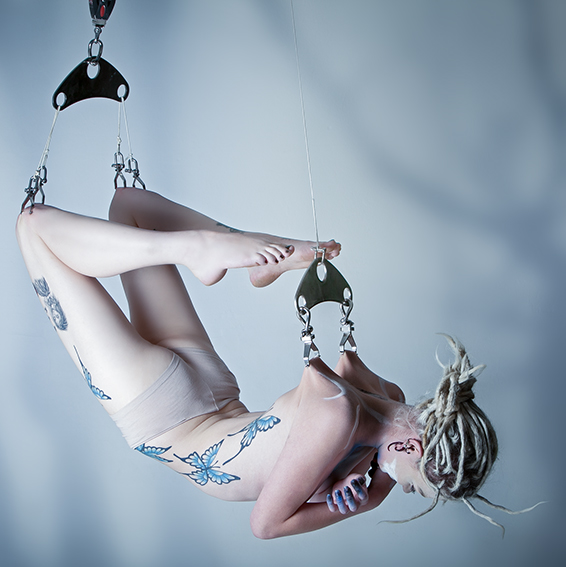 CONTENT AND ELEGANT: Lucia Martinengo is suspended from a total of six hooks and has been positioned to display a scorpion for her first body suspension
Photo: Provided by Pendeo

Martinengo has been suspended twice, the first when she was positioned as a scorpion. It was “a private” experience with only her, a photographer and the crew who conducted the suspension. The second time was more public and done at the Cool Ink tattoo convention last year.

“You feel weightless and there is no pain or pressure once you’re suspended, you honestly feeling like you are floating and are completely free,” said Martinengo.

Body suspension is not something that one should attempt unsupervised and should only be done by specialists in the field, there are risks if procedures are not followed.

“If you hang from hooks and you haven’t eaten a meal to get your blood sugar up, shock is something that could happen, but if you prepare yourself in the correct way you’ll be fine,” said Jensen

“It’s something that everyone should try in their lifetime,” said Jensen