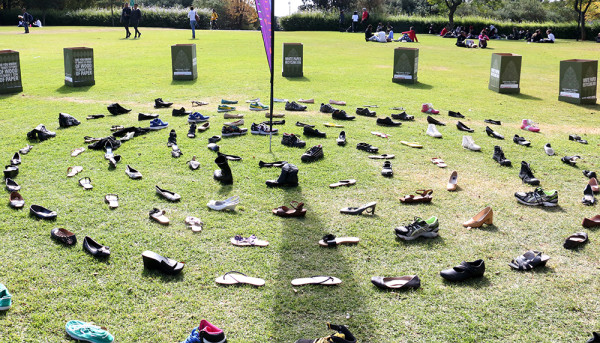 Over 100 Wits University students went barefoot yesterday, on a cold afternoon, in observance of international #OneDayWithoutShoes. The aim of the annual, global campaign which is celebrated on May, 10 is to raise awareness for children’s health and education.

Wits University students though took the campaign a step further and called for the donation of shoes, clothing and blankets and food throughout the week.

The Wits edition of the initiative is a collaborative effort put together by the Wits Citizenship and Community Outreach (WCCO) and Voice of Wits (VoWFM).

Students were encouraged to come to the event wearing the shoes they wanted to donate, take them off and walk through a puddle of rock and cold water to help them understand what it is like not to have shoes.

“It is just the experience of how children in rural areas live, they walk across mud and stones, it is putting empathy into play,” said third-year social work student and Social Work Students Association chairperson, Gift Khumalo.

WCCO will donated the collected the items to a number of NGOs and orphanages around Johannesburg. The items will be taken to charities that need them most, so students are encouraged to go beyond just donating their own shoes and clothing, but also think about children and elderly people.

Third-year social work student Campion Zharima participated in the event as part of his practical course work. Zharima and fellow students have researched the increasing number of orphanages in Sub-Saharan Africa and realised that “most organisations provide for shelter and sometimes food, but there are some basic stuff that they need, like shoes,” he said.