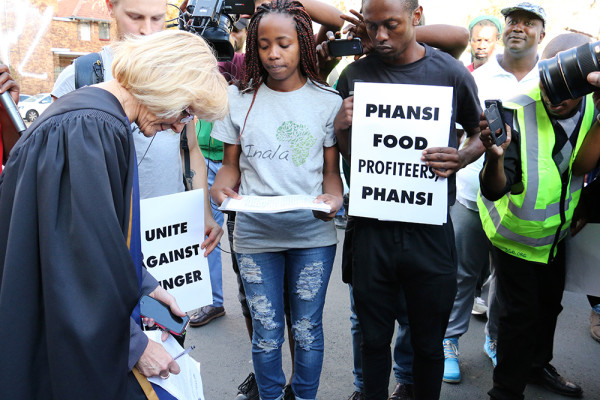 The Wits Inala Forum has today handed over a memorandum to Wits University demanding that management deal with hunger on campus after a petition was signed by 5 000 students. The delivery of the memorandum was part of the People’s Bread March which took place in Braamfontein today.

The Inala Forum, one of the organisers of the Bread March, calls on the university to commit itself to ending tackling the problem and to making data about food security on campus more transparent.

“We are tired of Habib (Prof Adam Habib) ignoring our requests. We are tired of the SRC not listening to us,” said second-year Accounting student and Inala Forum member, Tumelo Tladinyane.

“A lot of people are scared to come forward because they think [that] being hungry is a stigma,” said second-year Urban and Regional Planning student, and Inala Forum’s Marketing officer, Bellise Mondi as she read out the memorandum.

“We demand a meeting between SAFSC, Inala Forum and Wits management to propose a way forward in tackling hunger on campus,” said Mondi.

The memorandum was handed over to Wits Registrar Carol Crosley, who signed it on behalf of the vice-chancellor at the Wits stop of the Bread March.

The Bread March was co-convened by the South African Food Sovereignty Campaign (SAFSC) and the Inala Forum in protest against the increasing price of food and served as a call to government to enact the Food Sovereignty Act. The aim of the Act will be to “diversify our food system and ensure the people control the food system,” said the chairperson of the Mount Frere Food Sovereignty Forum, Mzimasi Ndongeni.

The march started at Constitution Hill and moved through Braamfontein to Wits University.