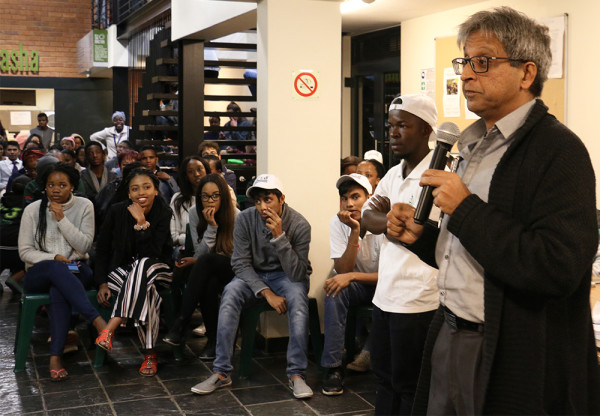 by Olwethu Boso and Mokgethwa Masemola

A referendum will be held at the Wits Junction residence in Parktown to decide the fate of the Lions Rugby team currently living there. Wits University’s vice chancellor, Prof Adam Habib held a meeting with the student residents to address their concerns about the provincial team living at the residence.

“If the vast majority of students feel uncomfortable and threatened, we’ll take action,” said Habib who recommended that the residence hold a referendum.

If the referendum so reveals, the VC will remove the players and the university will assume responsibilities for the contractual ramifications that may follow.

The meeting was convened following the establishment of a task team to deal with the issue. The task team concluded its investigation and proposed mediation between the players and Junction student residents. According to the house committee chairperson, Nkululeko Tselane, the house committee rejected the proposal of a mediation.

This comes amid constant tensions between students and the university over the issue of the players occuppying “student accommodation” when there are students who are sleeping in a library.

Students were aggrieved over the noise made by the players, lack of internet access, water and other operational issues at the residence in addition to allegations of assault against the players. “I was very aware about the Lions …What I heard for the first time is people saying that they’re not responded to,” said Habib.

“If people truly believe that their safety and security is at stake, then there is no option than to ask the Lions to leave, and I can guarantee that,” Habib concluded.

The VC committed himself to engage each of these issues through the house committee, the dean of students, Junction management and his own office.

Earlier this year, Wits Vuvuzela reported that a demonstration took place at Wits Junction residence in protest of 50 rooms that were being and are still occupied by the rugby team despite an accommodation shortage on campus. The university has been facing student accommodation shortages for a number of years now.

Former SRC president and Junction resident, Mcebo Dlamini said,“the university has no excuse to have non-students in a student compound; not unless Wits Junctions you strip it of the ‘residence status’(sic) we all have sleep-overs here like they do”.

The university has maintained that the Lions were brought in to subsidise the cost of the residence, while keeping it affordable for students. In 2015, the residence only filled all of its rooms in June, which meant that for half of the year, the residence was already running at a loss.

The referendum will be carried out over the next few days and the Dean of Students and the vice-chancellor will meet with the house committee to resolve the other issues aside from the Lions.