by Nasya Smith and Wendy Mothata

Hundreds of protesters joined Wits students today as they marched to the Zimbabwean Embassy in Pretoria to show their support for the #Zimshutdown protests. The march, organised by members of the Wits Zimbabwean Students’ Association, drew support from a wide range of organisations including Cosatu, The Committee for Workers International and the #FeesMustFall movement. 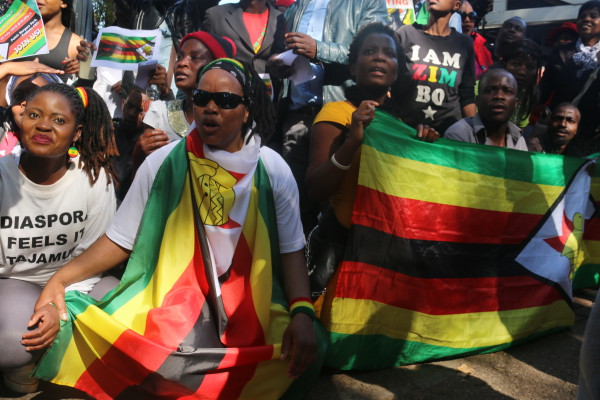 The #ZimShutDown protests gained momentum this week as citizens of the country protested against the government over issues of corruption and the ailing economy. Known as the Zimbabwean Students’ Solidarity March, today’s event saw protesters marching from Burger’s Park in Pretoria carrying Zimbabwean flags and posters reading “Mugabe must fall” and “We are tired of Mugabe and his minions”, among others.

The march ended at the Zimbabwean Embassy where organisers intended to hand over a memorandum to Embassy staff but were met instead by a strong police presence outside locked gates. The protesters spent some time outside the Embassy singing and chanting before dispersing.

Tino Gwenyaya the deputy chairperson of the Wits Zimbabwean Students’ Association said the march exceeded their expectations and the organisation intends to keep the momentum going through other projects. “We are going to facilitate a number of initiatives on campus and beyond to provide a platform for engagement and solidarity with the plights and struggles of our brothers and sisters back home,” Gwenyaya told Wits Vuvuzela.

Motheo Brodie, deputy president of the Wits Student Representative Council (SRC), who also attended the march said that the SRC assisted the Wits Zimbabwean Students’ Association because they felt it was their duty to assist students due to the current #shutdown protests in Zimbabwe.