The National Minimum Wage Research initiative released its main research report in which they highlighted the impacts and usefulness of increasing the minimum wage. The launch of the report was held at Wits on Monday.
A NATIONAL minimum wage would increase the earnings of vulnerable workers and reduce the rate of household inequality in South Africa, according to research published on Monday. 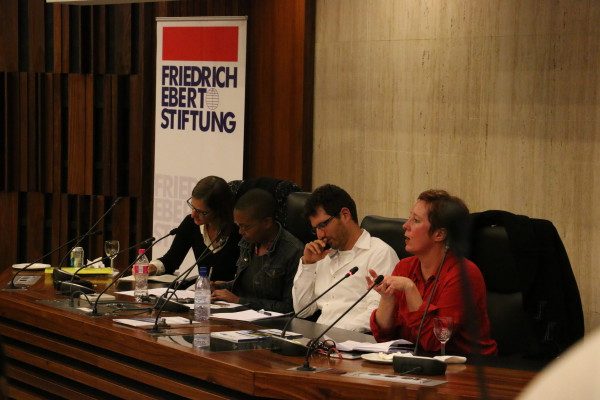 The speakers at the launch of the National Minimum Wage Research Initiative on Monday.
Photo: Aarti Bhana

A minimum wage would ensure that wages are able to cover the basic needs of workers and their families, while taking into account the relevant economic factors, according to research compiled by the National Minimum wage Research Initiative.

Professor Stephanie Luce of The Murphy Institute for Worker Education and Labour Studies in New York highlighted the benefits of raising the minimum wages in the United States for workers and she said that “many workers said they could quit second jobs and were able to get out of debt [with a higher minimum wage]”.

Gilad Isaacs, a researcher at the Wits School of Economic and Business Sciences said “the objective of the minimum wages is to ensure workers’ basic needs are met”.

Isaacs published the main report and highlighted that “minimum wages have been successful at raising the wages for low-wage earners in both developed and developing countries”. In South Africa minimum wages would raise household incomes and encourage greater consumer spending which in turn increase output and raise the levels of growth and productivity.

Additionally, the report shows that a national minimum wage can support economic growth, but does not necessarily raise employment levels, however, “it can be implemented without significant employment effects”.

“Increasing the spending power of workers not only impacts workers, but their dependents too,” said Angelo Louw, media liaison for the Studies in Poverty and Inequality Institute. “With greater spending power comes access to other opportunities such as employment”.

According to the report, the relevant benchmark in South Africa for the minimum wage would range between R3 500 and R5 500.