Zimbabwean Pastor Evan Mawarire attended a #ThisFlag Lecture at the University of the Witwatersrand, an initiative of the Wits Zimbabwean Students’ Association, Thursday July 28.

Protests in Zimbabwe should continue peacefully as the government cannot combat the resistance as long as it remains non-violent, said Zimbabwean activist for the #ThisFlag movement Pastor Evan Mawarire at a  public lecture hosted by the Wits Zimbabwean Students’ Association on Thursday. 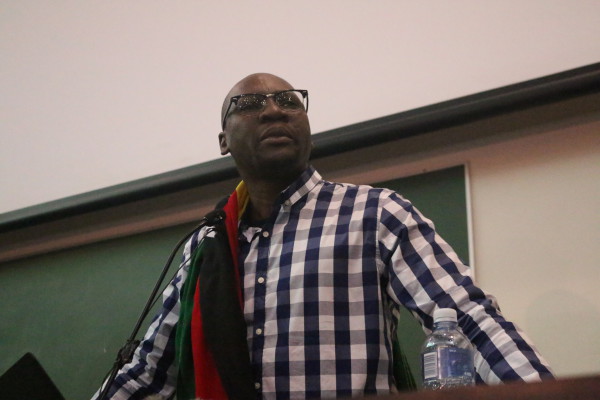 Mawarire was welcomed with cheers and singing by the crowd waving Zimbabwean flags as he entered the lecture hall. Some attendants wearing the Zimbabwean flag as a scarf, head wrap or cloak to show their solidarity with the #ThisFlag movement. Mawarire addressed students, Zimbabweans as well as South African citizens with both sadness and optimism for the future of Zimbabwe.

“Not anymore will we let the ruling classes determine our future. They have failed us and we must hold them accountable,” said Mawarire said. “We want our leaders to tell us where is the Zimbabwe we were promised when our grandparents sent their children to deliver independence. Where is the Zimbabwe you promised us at election time in 2013?”

“Where is the Zimbabwe that our founding fathers fought for. What do our ancestors think when they look down at the Zimbabwe that we now live in? How do we tell the unknown soldier that her sacrifice was worth it when we still live in an oppressed and afraid nation. Not anymore can they stay silent while we weep.They must answer us. They are meant to be our government, servants of the people,” Mawarire said.

The University of Witwatersrand dean of students, Dr Puleng Lenka-Bula, welcomed Mawarire and said that the university encourages its students to not only have degrees but to also be active members in the society.

Mawarire had been scheduled to appear at a lecture last week but had to cancel. At this week’s event he apologised for failing to attend the lecture the previous week and confirmed that it was due to security concerns.

After the lecture Mawarire was encircled by the crowd who wanted to meet the pastor and have their photo taken with him. He was soon after escorted away with security.