Anti rape protesters stole the show at the IEC elections announcement when they staged a protest against President Jacob Zuma, in support of his rape accusor “Khwezi”.

Anti-rape activists staged a silent protest that took the attention away from a speech by President Jacob Zuma on the election results at the Independent Electoral Commission centre in Pretoria.

The four women, all dressed in black, held signs up reading “Remember Khwezi” and “10 years later” as Zuma begun his speech. “Khwezi” was the pseudonym used by the woman who accused Zuma of rape in 2006. Zuma was later acquitted of the charge. 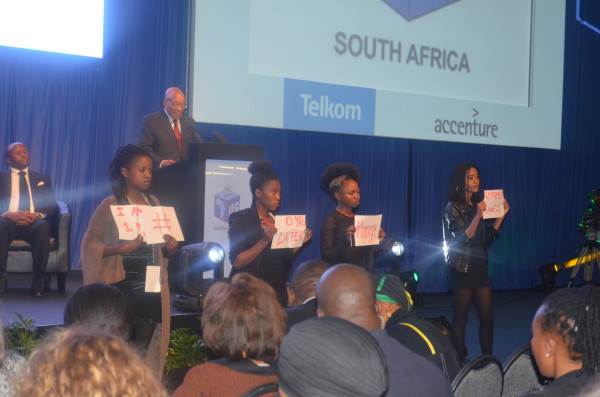 THE STATEMENT IS MADE: Jacob Zuma continues with his speech in the background of the rape protest against him    Photo: Nozipho Mpanza

Some of the women appeared to be members of the Wits #1in3Campaign, and carried a sign reading the hashtag, a reference to the statistic that one in three women will be raped in their lifetime.

One of the women also carried a sign saying, reading “Kanga”, a reference to Zuma’s rape trial in 2006. In his testimony, Zuma had said that one of the reasons he believed Kwezi wanted sex was because she had been wearing a kanga.

While the room full of South African dignitaries was clearly distracted by the protest, which carried on for the duration of the address,  the president steadily continued with his speech.

As soon as he had finished speaking and left the stage, security began to forcibly remove the protestors. After a struggle, they were pushed outside from where screaming could be heard inside the election venue.

IEC deputy chairperson Thierry Tselane took the podium to apologise for the “distractions”. The apology was received my disgruntled objections from members of the crowd. He also asked security to treat the protestors “with sensitivity”.

There was a heavy police presence outside of the venue where members of the press rushed to find the women. No sight of the women could be seen. But one of the women, Wits activist Simamkele Dlakavu soon tweeted out, “We are all okay.Thank you. #RememberKhwezi”.