Take a look at this week’s cool kids

When we spotted them on campus last week, we knew that something about them was special. We put up a short video of Antonio Buys and Anwyll De Leeuw doing what they do best, playing music, and you loved it so much we have them this week as our cool kids.

It’s hard to walk past Buys and De Leeuw without being drawn to their soothing sounds as they sit peacefully with guitar and amp on a sunny day. Their sound transports you momentarily from the stairs of your learning institution to a music lounge, with a cocktail in hand and great conversation.  Buys and De Leeuw are both foundation music students at Wits. While Buys majors in classical music and de Leeuw in jazz, they come together for their mutual love for good music.  You’ll find them playing on campus on Tuesdays and Thursdays, often on the stairs in front of the Great Hall. “I play for the experience in front of a listening audience,” said De Leeuw as he stroked his guitar strings.

It is evident that the duo feels right at home as they sit undistracted by the onlooking passersby. Though alike in their taste of music, they are inspired by different things. For De Leeuw, it’s simply the art of music. 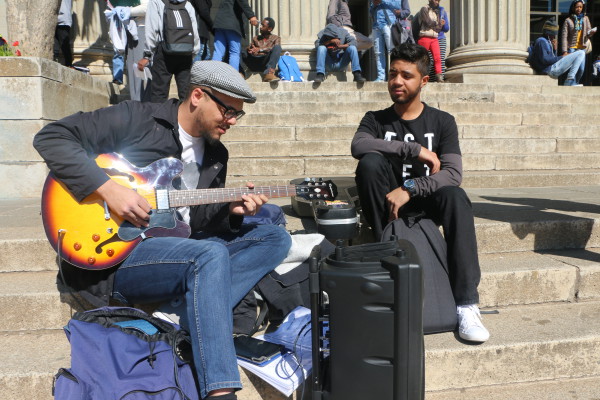 COOLKIDS: Anwyll and Antonio sure know how to make it a good day on campus Photo: Nozipho Mpanza

“I’m curious about music,” he said, thinking about his inspirations. Buys is inspired by his role model, South Korean musician Sungha Jung. The reason behind his reverence of Jung is because “he specialises in finger guitar.”

Ultimately, these young men want to use their gifts for the benefit of society “I want to add positivity to the world through music,” said De Leeuw.  Given the positivity he has managed to add to our very own campus, we believe both he and Buys are well on their way to the goal.