The theme was “Unapologetically Feminine” and the evening that combined both art and activism, hence “artivism”. The entrance fee was a donation of at least two packs of sanitary pads, which were either sold at the door for R10 or could be brought.

Third-year student, Wits Citizenship and Community Outreach (WCCO) and organiser of the event, Olebogeng Koatlhai, said the target was to obtain at least 300 packs of sanitary pads at the end of the night, but said she was not disheartened by the number that they had received. She said she was also very excited about the turnout.

“We filled the whole room,” she said.
The event was held at the SouthWest Engineering Building’s foyer, where more than 50 people attended.
Second-year Pharmacy student, Thania Kolanada, said the event was “different” and that she wasn’t aware that the availability of sanitary pads was a big issue in our society. She said “I’m glad for this because it opened my eyes and now I realise that it’s such a basic need and lots of people don’t have access to it.” 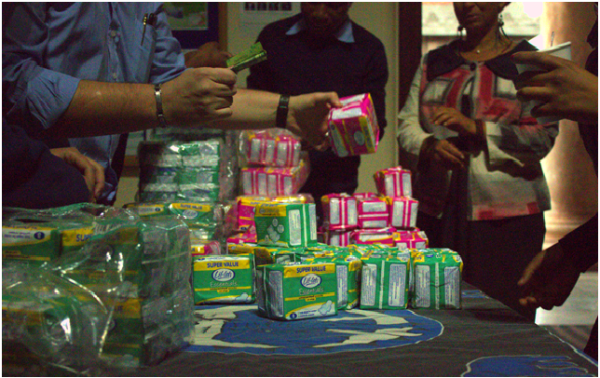 Sanitary pads being purchased at the entrance to donate to students
Photo: Aarti Bhana

Performing poet, medical doctor and activist for women’s issues, Dr Thandokuhle S. Mngqibisa, was one of the headline poets present. She said that the access to sanitary pads is one of the most important and most neglected issues.

“It’s an unfair imposition on our bodies by nature, but we can ease the load a little bit by allowing them to be comfortable and not have to stay home,” she said.
She added as a poet, her contribution is in awareness, and that the most important aspect is to let others know, so more people can get involved in such initiatives.

“It’s inherently empowering to know that you matter and to see someone going through the same thing,” she added.
Koatlhai said she really appreciated the effort people took to come and support, celebrate and motivate women, she said she hopes that this will be the first of many events to uplift the student society.