The rage of the youth of South Africa was the focus of the two papers presented at the 15th annual Ruth First memorial lecture in the Wits Great Hall on Wednesday August 17. Ruth First Fellows, Nolwazi Tusini, 28, and Lwandile Fikeni, 32 used contemporary student protests and the assimilation of Black children into white schools in the 80s as the lens through which they explored expressions of violence and rage.

Tusini, a radio producer, used her fellowship to research what she called ”the 1980s cohort” referring to the integration of scholars into formerly white-only schools. Tusini explained this process as a time when “little brown bodies were sent into white spaces hopeful, unassuming, oblivious.” She explained that the assimilation that happened in these spaces through language and culture ultimately caused a disassociation between these kids and their communities.“It is significant that I am giving this speech in Englishas I  can no longer articulate it in my mother tongue”, Tusini said. Tusini attacked the idea of the “rainbow nation”, saying “who does the rainbow nation serve …- when your mother can no longer speak to her grandchild because you sent them to a good school?” 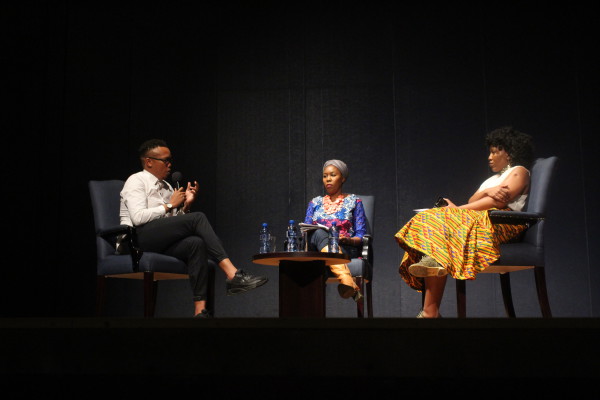 The myth of the “rainbow nation”, was also tackled by Fikeni, an arts journalist currently writing for the Wits Vuvuzela. “The rainbow nation was a project aimed at making black people unremember all that had happened to them”. He continued by stating that the white man is the main beneficiary and narrator of the post-apartheid/democratic society, using the “F**k White’s” campaign as an example.

“Why am I not allowed to say “f**k you” when you f**k me over every day?” “Vulgar language is a necessary means, to disrupt “rainbowism”, Fikeni argued.

Keynote speaker Leigh-Ann Naidoo, a Wits lecturer and a social activist, set the tone for the papers delivered by reflecting on the ideas of revolution and the works of the current student movement. ”There has to be a measure of shut down in whatever form, for the future to be called,” Naidoo said to an appreciative audience.

This year’s lecture was moderated by a former Ruth First Fellow, Sisonke Msimang. Full text versions of the papers can be downloaded from here. Listen to the audio recording of the lecture.