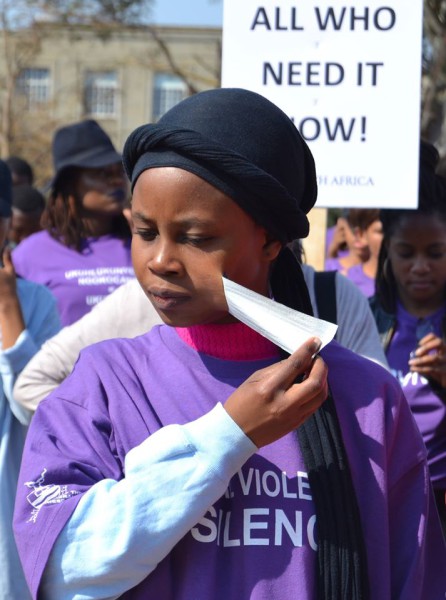 by Tebogo Tshwane and Kyle Oberholzer

Wits University held its annual silent protest against sexual violence and in solidarity with survivors on Wednesday, August 17.

While Wits was hosting the event for the fourth time, the protest celebrates its tenth anniversary this year.

The first silent protest took place at Rhodes University in 2006 and was initiated by gender activists as a means to show solidarity with Khwezi, the complainant at the centre of the Jacob Zuma rape trial.

Aids Healthcare Foundation regional policy and advocacy manager Larissa Klazinga said the over the years the protest has even gone international.

Klazinga, addressing participants at Wits, said that in the ten years that she has been involved with the protest she has seen solidarity heal wounds.

“By you being here today and allowing people to tell their truth is fundamentally empowering and healing” she said.

Silent protestors marched through Wits West Campus to East Campus blowing whistles to disrupt the space and force it into awareness while other participants wore tape on their mouths to symbolise the woman who are silenced by rape and gender based violence.