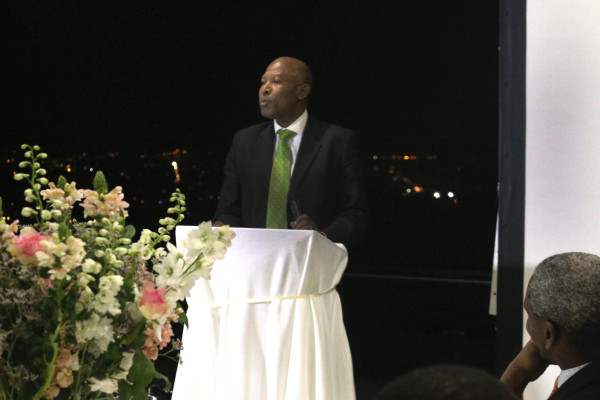 The gala dinner organised by the class was attended by the South African Reserve Bank (SARB) Governor Lesetja Kganyago and Prof Imraan Valodia, who is the dean of Commerce, Law & Management.

Kganyago’s keynote address focused on changing already successful companies. The governor, in his striking lime tie, said businesses are being disrupted every day.

“Executives think, ‘why fix something that’s not broken?’,”Kganyago said. Kganaygo then brought the gathering to roaring laughter when he spoke about the challenges the Reserve Bank faces. \

“Reserve Bank can’t go bankrupt, we just print more money” he joked, before saying that the bank can be disrupted too.

He said as much as they don’t have competition as the Reserve Bank, they do face threats that require them to be constantly changing in response to their environment. Mobile money, cyber threats such as hacking and volatile markets are some of the threats he said the Reserve Bank has to deal with.

“We had also alienated ourselves from the citizens, whom we serve,” he said. “We realised we had to re-connect with them or be disrupted.” Kganyago said that strategy formulation and execution was the key to changing successful companies by implementing a sustained programme of change.

“Change will now be the status quo,” he said. “The heart of any change program is the people” he concluded as his final advice to the MBA class.

Several of the MBA students related how difficult their course was. Maggie Digabane said the MBA was like a “pressure cooker”. Digabane, who was diagnosed with ovarian cancer in February, chose to continue with the programme because the ill-health reminded her that she needed to leave wealth for her daughters.

“Wealth is the best gift I can give my daughters,” she said. Digabane revealed that during the course of the year, she started her own business, Kitso Thebe Consulting, and was finishing her last round of chemo this month.