By Lwandile Fikeni and Zanta Nkumane

On Tuesday, about 80 National Education and Health Workers Union (Nehawu) members marched to the Senate House concourse to demand that the clause that forces them to use Witsmed medical aid be removed from their contracts.

Witsmed is a closed scheme administered by Discovery, which the workers say eats into their take-home salaries. Workers on Witsmed must pay a monthly contribution of R3 267.

“Half our money goes to the medical aid,” said Paati Sam Mangena, chairperson of the Wits Nehawu branch that organised the picket.

The requirement that workers use Witsmed was introduced in 2001 when the university moved away from the basic cash-plus salary package (where you have a basic salary with the benefits added on top) to a total cost to company.

The workers’ grievances include claims that the university does not subsidise the medical aid thus forcing the workers to fork out the full amount from their own pocket. Also, the closed scheme restricts members to a limited group of doctors, the workers say.

“If you are sick in Limpopo, you can’t use the medical aid, you have to come back to Joburg,” said Nehawu branch secretary Tiny Minyuku.

On the issue of subsidisation the university’s human resources head Kgomotso Kasonkola said the medical aid subsidy is included.

“We might not have a budget line or item line that says this is your budget for medical aid but it was incorporated at the time when the total cost to company was decided in 2001,” he said.

However, Tumisho Madihlaba, the deputy branch secretary of Nehawu at Wits, rejects Kasonkola’s claim that the subsidy is built into the workers’ salary packages.

The worker’s contracts with the university requires them to be on a Wits medical aid unless they are a dependent on another person’s scheme.

Employees earning less than R 205 433 per annum are exempted from the WitsMed scheme and were moved to the less expensive KeyHealth last month. 138 Wits workers were moved to Key Health, said Kasonkola.

Monthly contributions for comprehensive cover for Witsmed and KeyHealth are R 3267.00 and R 1862.00, respectively. Yet, the benefits are similar, according to Madhlaba.

When workers noticed the substantial savings of R1 405 for KeyHealth members, those on Witsmed began demanding the same savings. 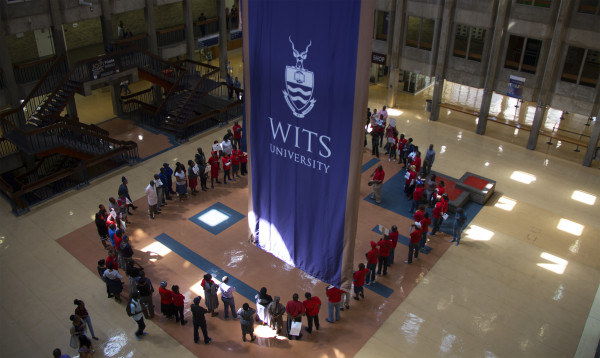 “They noted what they could save,” Kasonkola said before adding that “we told them that you are not allowed to move because you are above the threshold”.

Madihlaba seconded Kasankola’s view that it is these “substantial savings” that prompted them to protest against being made to join Witsmed.

“Medical aids were presented and we saw cheaper options with the same benefits at Witsmed,” said Madihlaba.

The workers are also unhappy with another clause in their contracts and “feeling forced to contribute in order to cross-subsidise members who are already retired or work elsewhere,” Madihlaba said.

“It’s unfair,” said Madihlaba. “For example, a professor retires from Wits, goes to another university, works there, makes millions and somebody who earns R9 000 here subsidises that person. How fair is that?” he asked.

Madihlaba said current workers are being forced to join Witsmed because the university is worried about the collapse of the scheme which would lead to the pensioners, who are still members, suing the university.

Kasonkola agrees: “We understand that there is a problem with the medical aid but as the university we say if we relax the clause or delete it, the scheme is going to suffer and the members are going to have complaints against the university and we’re likely to experience legal suits from the members because we would’ve effectively killed the scheme. And legal suits we can’t afford.”

Nehawu’s grievances have been tabled for the Wits University Council sitting on September 30.