Student society, Uplifted Life, hosted an event at Wits University this past Saturday to teach High School learners on the importance of choosing the right educational path. The Uplifted Life society held an event for High sShool learners from Soweto-based schools on Saturday, with a focus on educating scholars on the importance of their education.

Ida Motshegoa, a second-year Mining Engineering student and an organiser of the event said, “some of them [school students] don’t see beyond their own background and bringing them to Wits helps them envision the fact that [they] can be here one day  and they can work hard and make it this far’”.

#OneHopeOnePeople was the theme of this year’s event, inspired by the organisation’s vision to unite diverse people around a common cause.

About 500 students from Aurora Girls High School and Reasoma Secondary School in Soweto gathered at Wits for the event.

More than 100 students, neatly dressed in their school uniforms trailed into the SH6 lecture hall, where they were addressed by student volunteers from the Science, Accounting and Business faculties. Other students were allocated to the Wits Science Stadium lecture halls.

Uplifted Life chairman Mpho Ramokgopa said the vision of the society is to inspire and educate the scholars about choosing their careers wisely.

“We live in a world where there is education, but without access, we are here to help you make an informed choice,” he said. 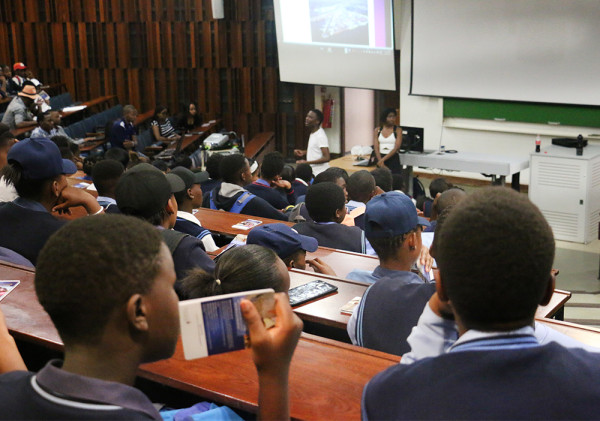 An educator from Aurora Girls High, Lefa Sekonpo, said the motivational talks from student mentors encouraged the learners’ ambitions to grow despite the social issues they face.

“They [learners] become positive and realise they can become something in society, one day”, he said.

As an educator he said he will also encourage learners to focus more on English and Mathematics, “because those are the pre-requisites for most universities,” he added.

Not every student was excited about the day. Fourteen-year-old Aurora Girls High learner Samukelisiwe Ntshangase said the event was not particularly helpful to her because she wants to become a film producer.

“I have no interest in doing science, I just want to pursue my film producing path,” she however added that it did help her understand the minimum requirements needed for her to get into the university.

The event concluded with a concert at Wits Great Hall, where the Jesus Christ to all Languages choir among many others performed to the very responsive crowd of scholars.