The clause compels all full time workers who earn more than R205 433 per annum to belong to the WitsMed scheme, unless they are a dependent on another person’s scheme. Nehawu says, among other grievances, the scheme is too expensive, and each worker should have the freedom to choose a scheme that suits his or her own pocket.

On Thursday, September 15, Nehawu led a march through campus, to hand over a memorandum to university management. This followed on daily marches during lunch last week, about the same issue. 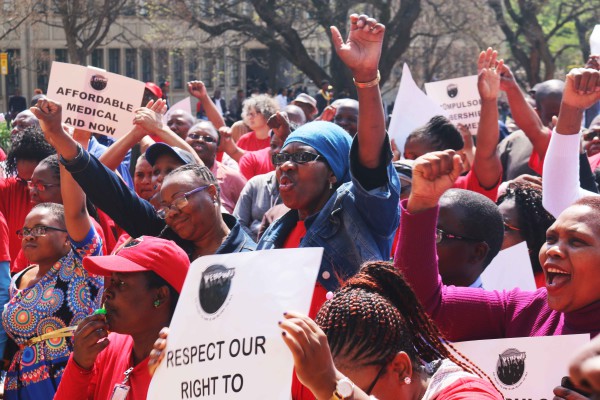 AMANDLA: Workers gathered on the Great Hall steps to hand over a memorandum that demands the university to allow workers the freedom to choose their own medical aid scheme. PHOTO: Zanta Nkumane

The workers handed their memorandum to Prof Tawana Kupe, Deputy Vice Chancellor: Advancement, HR and Transformation, on the Great Hall steps. Prof Kupe acknowledged receipt of the memorandum in writing, but said he was not authorised to address the workers.. Speaking during the march, Tumisho Madihlaba, the deputy branch secretary of Nehawu at Wits, said that the union had had an informal meeting with management on September 8, where Vice Chancellor Adam Habib was present.

“ [Habib] actually agrees with us because apart from us contributing to this medical aid, the university has to put money annually and it doesn’t benefit the people currently contributing,” he said.

Following that meeting, Nehawu was scheduled to meet with lawyers on Friday, September 16, to chart a way forward.