Wits EFF to elect its leadership structure next week 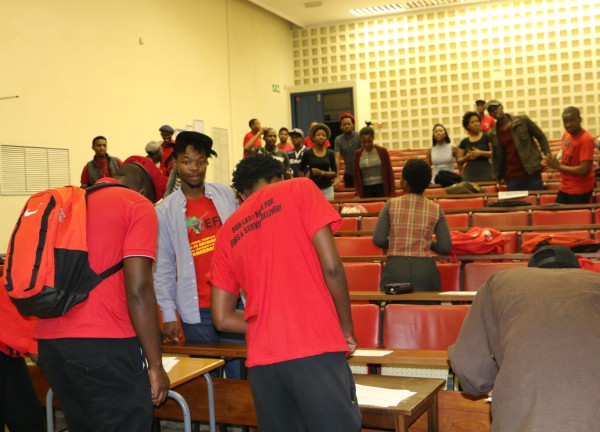 The Wits Economic Freedom Fighters (EFF) was unable to elect its leadership structure this week after a meeting was disrupted owing to disputes over the election process.

The meeting to elect new members to the various portfolios was ended abruptly on Tuesday, September 13, due to disagreements between the presiding officer, Rendani Nematswerani and some EFF members. The members were concerned about the fact that Nematswerani, also the deputy secretary general of the national EFF student command, was solely responsible for the counting of votes and argued that he should have been assisted.

Wits EFF convenor Koketso Poho said members felt that the presiding officer was “bullying” the session. “We can’t allow views of loyal members to be suppressed however small they may be in number,” said Poho.

Nematswerani told Wits Vuvuzela that there was a misunderstanding between the rules of the house and the guidelines of the student command. “We must allow members to learn the constitution and familiarise themselves with them and we are here to assist,” said Nematswerani. He went on to say that they (Wits EFF and himself) were all under the umbrella of the EFF and were working towards the same goal, “misunderstandings may occur but it is their duty to correct and build the EFF”.

Poho says they have requested the secretary general Phiwaba Madokwe to be present at next week’s elective meeting and also to be assisted by a deployee to avoid disputes.  Poho added that there was no infighting within the student movement but members felt leadership was being imposed on them and therefore had to defend the legitimacy of their branch.