Anxiety among final-year UP students about impact of closure

University of Pretoria students who are completing their degrees raise concerns on the impact the protests will have on their academics following the university’s decision to move the October recess forward. 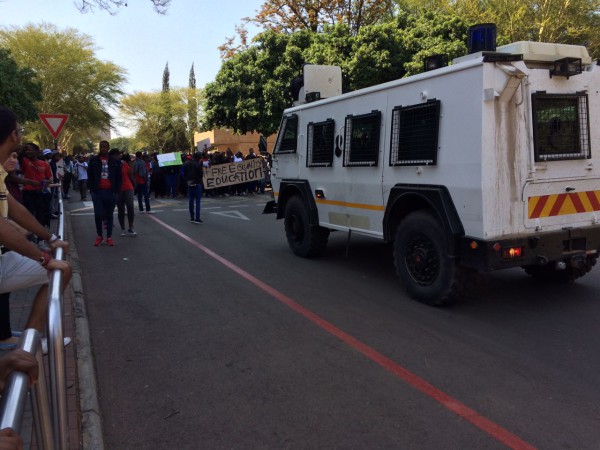 UNIVERSITY OF PRETORIA: An armoured vehicle is seen on the Hatfield campus. Photo: Sarah Hulett

The announcement on Monday by the University of Pretoria (UP) that the October recess had been pushed forward from October 3 to September 26, has caused a lot of anxiety among the university’s students.

In a statement, the UP management said: “Despite the presence of police and although we have an interdict against unlawful protests, a group of students attempted to blockade some entrances and to disrupt some classes on Hatfield campus this morning of 26 September 2016. In interest of the safety of our students, staff and property, University management has decided to move the October 2016 recess forward. The recess will start on 26 September 2016. The University will reopen on 10 October 2016 as planned for the start of the fourth quarter.”

Nicholas Halsey, a final year law student told Wits Vuvuzela that, “Since the strike started I’ve missed two assignments and four semester tests. Final year law students have their dissertations due and criminal law the day they are back and, in addition, around five other tests, one of which has been rescheduled from the strike.

“With two weeks of semester left, all the work plus tests missed have to fit into that time. I am angry because it is not a protest, it is intimidation at its best and it has elevated one group’s interest above another. No one would mind them protesting but let us carry on at least,” Halsey said.

Craig Jackson, who is completing an honours in psychology, said, “I have two tests that I was supposed to write this week (one was moved to this week because of the disruptions last week). So it affects most of us, I think, because of the uncertainty about when we will be able to get back to our normal schedules and finish up this year.”

A final year engineering student told Wits Vuvuzela that he had mixed feelings about the recess being pushed forward. “I had two assignments due Friday which I wanted to get out of the way because on Monday we received a huge project that is due in four weeks and now  we don’t have class to ask any questions we  may have about the project,” said Wesley Swanepoel. “Our lecturer informed us that we are going to have to email him with the questions that we do have and it will be hard to explain certain things through email” Swanepoel said.

Swanepoel added, “I have engineering week the week after  the recess, and now we don’t know what we must study and what is going to be covered. I’m in my final year and I just want to get my degree done and dusted. All of this prolonging is just going to make missions for me later cause if I can’t write exams in December, I won’t be able to graduate in March and I can only register to become a professional engineer only once I have graduated, so if I graduate late, it means six wasted months of being able to work.”

A third year education student who wished to remain anonymous said, “Since the moving of the recess forward, I haven’t been as affected as most as we had just returned to campus yesterday after two-and-a-half months of practicals. Fortunately, I was lucky enough to submit my portfolio yesterday on campus before the chaos ensued.

“However, my compulsory lecture that I take for an additional module was cancelled once again as campus had been evacuated. We now face the issue of not knowing whether our next test will still occur on the scheduled date and whether or not the content will change as we cannot write the test without having first gone through all the content in lectures.

“Since the protests erupted last week, our marks have not been released for tests that were completed about three weeks ago. Additionally, I was supposed to go for an interview on campus for an honours programme which has now been cancelled altogether and I was informed this morning that they will only be looking at our marks to see whether or not we make it. I’m quite frustrated at the moment as I just have two more months of my degree to complete before I can graduate next year and with the shutting down of the university, that prohibits us from doing so,” the student teacher said.

The EFF at UP posted on Twitter that, “Students must not go home. Fill in the form at res [for special permission not to go home] and if not approved, send us a message, and we will occupy that res”.

UP management stated that, “In order to minimise the negative impact of the protest on the academic year, arrangements for catch-up lectures and tests have been made. We are working with internal and external stakeholders in order to make recommendations regarding 2017 fees and the national conversation around free education.”