Protesters take on task to tell their own story

Two students who are volunteers of the media task team took to the front of the marches to do coverage of the days events. 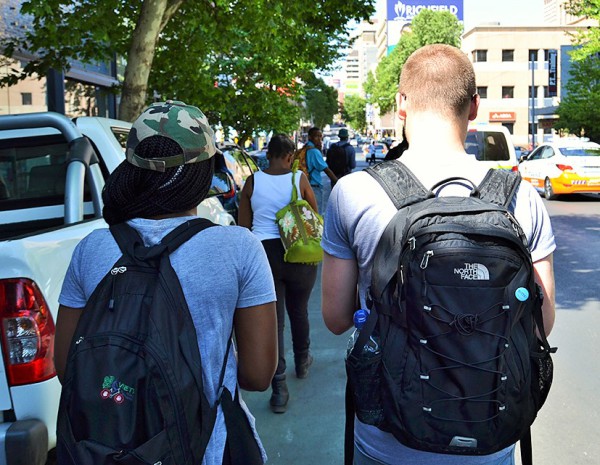 The Fees Must Fall movement (#FMF) has received worldwide coverage but students in the midst of the protests have decided to do their own coverage of the recent protests and give an alternative perspective to the mainstream narrative.

On Thursday, September 22, #FMF at Wits set up a media task team made up of volunteers who would generate media coverage from inside the movement. Wits Vuvuzela spoke to two of the volunteers.

Ayanda*, a Wits student who took part in the protests last year, was dissatisfied with the media coverage. “They often misrepresented students and often published half-truths, and I saw what a negative impact that had on the movement.”

“That’s what partially led me to take part in the protests again this year, only this time as a citizen journalist,” she said.

Ayanda has been working alongside a fellow student, Alex*, who hails from Germany. Alex initially covered the movement through pictures and videos “to send to family and friends abroad to educate and inform them on what was happening at Wits”.  He says that the task team “seemed to be the most suitable position for us as we are concerned of the way in which the movement has been portrayed by outside media”.

Reflecting on the work of the task team, Ayanda said, “We’re in charge of taking pictures and videos of the protest and relaying them to [other members in the media task team] in charge of social media and/or writing articles.”

She also said that being in the protest as a participant and “being on the frontline [as a reporter] are two completely different spaces; we consider it a privilege that we [get] to experience them both”.

*Both interviewees declined to have their surnames published.