Camaraderie in time of hardship

What it was like spending a day at Hillbrow Police Station while waiting for students who were arrested as part of the Fees Must Fall protests.

The street is lined up with police cars in the middle of bustling Hillbrow. On one side of a street, spots of colour can be seen of clothes hanging off makeshift lines on balconies of an unkempt block of flats. On the other side, several young people, sit outside the Hillbrow Police Station. Some are engaged in conversation, while others clutch onto each other, staring blankly into the distance.

This was the scene on Tuesday, September 20, after 30 Wits students were arrested for “contravening a court interdict”, according to Hillbrow Police Station spokesperson, Mduduzi Zondo. The students were part of a group that had blocked entrances to the university as part of Fees Must Fall protests at the university.

Early that afternoon, word came that the students would be released at 4pm, and two of us were assigned to report on this.  We made my way to Hillbrow Police Station at 3pm to await the release. As soon as we arrived, one of the 30-or-so students waiting outside the station invited us to sit with them.

However, 4pm came and went, and the arrested students were not released. In fact, they would only be released at 9:30pm that evening.

During the eight hours I spent outside the police station, the number of friends waiting for the arrested students never dwindled. Most were from Men’s Res as many of those arrested also resided there. Strangely, the longer everyone waited, the higher the levels of energy became. Such a positive spirit in such negative circumstances was rather surprising. 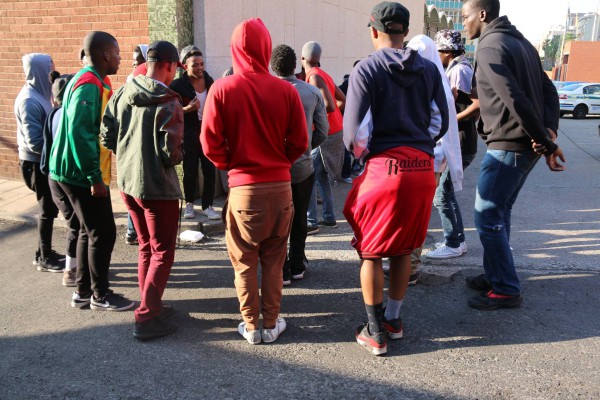 Men’s Res/ Raiders danced and sang outside the Hillbrow Police Station before the release of the 30 Wits students. Photo: Nokuthula Zwane

Voices worthy of a rehearsed a capella group came from the students while they danced to struggle songs their ancestors had composed many years ago. Smiles were plastered on their faces while looks of love were passed around the circle of friendship. The moment the singing began, I felt as if I was included in the strong bond the men of Men’s Res shared.

This was a moving experience for me, as I was surrounded by people who were fighting so hard for something that was of necessity to them — free education — while waiting for their peers who were paying for being part of this battle.

For some reason, I felt uncomfortable about the space I was in at that moment, as compared to what I imagined the protesters were going through. It was later, after getting back to the comfort of my home that I realised that the discomfort was necessary as it had brought me to a better understanding of my fellow students.

In the space of a few hours, I observed the ideal attitude I would hope to have when faced with life’s challenges. And one thing that will never depart from my memory is the joy on the faces of the detained students upon their release, when they were greeted with the happy songs and the warm embrace of their friends.