A silent march has been organised by a group of students who want to return to classes at Wits University. 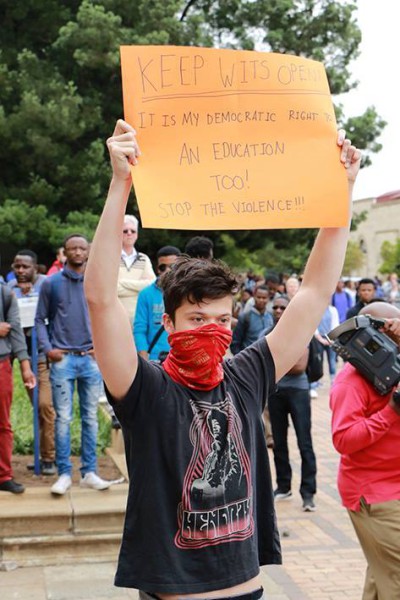 A student expresses his wish to have Wits open for lectures. Photo: Dinesh Balliah.

A group of Wits University students has taken to whats’app to call for a silent march in favour of reopening the institution. The #TakeWitsBack march is due to start at the Wits Science Stadium tomorrow, October 5, at 10:00.

Stuart Young, one of the organisers of the march said “the movement tomorrow is aimed at allowing those who have felt too intimidated by the police presence and the #FeesMustFall activists to be able to voice their opinions”.

The film and television production student posted a Facebook status update earlier which read: “We can’t hide this is our education too and we will not be bullied out of expressing our opinion. Therefore tomorrow I would like to call upon everyone who feels as I do to call to meet me at the Wits Science Stadium where we will silently and non-violently march to the Great Hall and hold discussion”.

“I am not against what #FeesMustFall fighting for, I just do not like they way which they are doing it ,for example, intimidating fellow students into not going onto campus and disregarding their points of view (as happened to me today),” said Young. Earlier today, Young was asked to leave campus after prostesters took offence to a message on a poster he was holding.

The placard which read: “Keep Wits Open, it’s my right to an education too”, was ripped apart by a Fees Must Fall protester and Young was eventually asked to leave the campus by some protesters.

Final year law student, Pervania Pillay, who is heading the #TakeBackWits movement along with Young told Wits Vuvuzela, “We want the Student Representative Council (SRC) to know that we support the movement for free education but not the shutdown of campus … we want the academic year to continue without hindrance”.

Pillay said the march will still continue despite the late notice of an extended suspension of academic activities by Wits University.