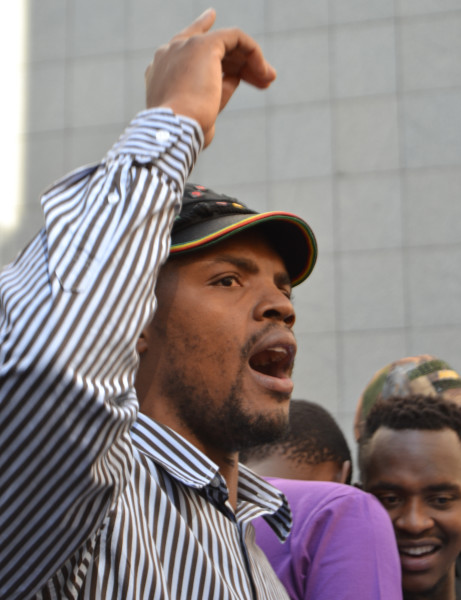 The mood at the Johannesburg Magistrates’ Court was sombre today after Magistrate Albertus Roux announced that he would only rule on #FeestMustFall leader, Mcebo Dlamini’s bail application tomorrow, October 19.

Dlamini’s age and secondary residential address, which the prosecution had not verified when he appeared in court for the first time on Monday, were verified today when the defence provided the court with legal documents with Dlamini’s personal details.

Dlamini’s date of birth was confirmed as December 17, 1986 and his address was that of his mother, a Johannesburg resident who works at Wits.

In opposing bail, the prosecuting lawyer, Steven Rubin cited Dlamini’s dual citizenship as he was born in Swaziland but holds South African citizenship as well. He argued that this meant Dlamini could be a flight risk.

Dlamini’s lawyer, Mongezi Ntanga, countered, saying Dlamini was a well-known person in the country and would not try to flee.

Ntanga added that Dlamini was willing to abide by any conditions put forth by the court should he be granted bail.

But Rubin sought to prove to the court that Dlamini was not trustworthy. On Monday, the defence had argued that he would be prejudiced if he went back to custody because he claimed he was due to write a test today. However, Rubin proved that Dlamini had lied to the court about having to write a test today. Ntanga, however, said this had been an “honest mistake” from his client.

The prosecution also argued that the release of Dlamini would pose a danger to the public. For evidence, stills from video footage were presented which purpoted to show Dlamini throwing rocks during the #FeesMustFall protests.

The prosecution also said Dlamini had the ability to incite violence towards other students and police officials, however, the magistrate deemed the claim to be unfounded.

Magistrate Roux said he needed time to deliberate on what was presented in court today and assured Dlamini that his judgement would not take long tomorrow.

Vuyani Pambo, another #FeesMustFall leader, addressed the media outside the court and said he was not happy with the way Dlamini’s case was being handled. He said the law officials overseeing the case were not giving the case “the gravitas it deserved”.

“I look at the scenario and what I learned from that court was that there was no sense of urgency. The judge speaks as if an overnight stay in jail is a simple thing,” said Pambo.

There was a crowd of supporters outside the court. This was made up of students, Wits workers and included Walter and Albertina Sisulu’s grandson, Shaka.

Another night in cells for #FeesMustFall leader, October 18, 2016