Wits on edge under police guard

The Wits University academic year kicks off on Monday, and yet there are signs that the university is not expecting things to go smoothly. 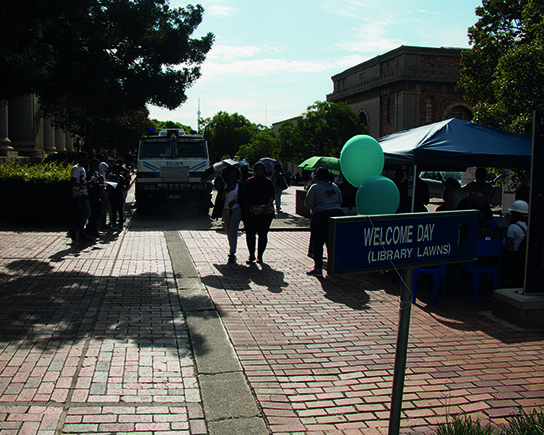 There is a strong and visible police presence on all campuses, possibly because there is uncertainty about what the #FeesMustFall movement will do next.
After the university council’s announcement of an 8% fee increase in December, the movement expressed unhappiness and vowed to disrupt the academic programme as early as possible.
The president of the Wits SRC, Kefentse Mkhari , told media that the university would have to contend with a student “revolt”.
“I have told Wits vice-chancellor Adam Habib directly that a student revolt was on the way and through his public statements that he spoke to student leaders, that he was also putting our lives at risk because he is now creating the dangerous perception that we (student leaders) are sellouts.
The SRC had lobbied hard for a zero increase, but the council decided that would be detrimental for the university.
Mkhari was not convinced. “Students understand that the university has expenses, but if Wits was really concerned they should have come down to the students and marched with them to the Union Buildings. But instead Habib and the university have decided to protect government at the expense of students,” he said.
The revolt has not materialised yet, but it seems the university is not taking any chances. Members of the South African Police Service are stationed in front of the Great Hall, and have occasionally been spotted patrolling campus on horseback.
However, the number of police vehicles is significantly reduced as compared to the end of last year.
The SRC Secretary General David Manabile told Wits Vuvuzela that the SRC was aware of how campus had already become ‘militarised’ even before students had officially started the academic year, but would not say what their reaction would be. Ayanda Kananda, a first year BCom Accounting students said, “Before coming to the university, seeing the Fees Must Fall on the news and social media, I was afraid. I thought that I was going to get stuck or hurt from a protest I am not involved in.”
She said her fear had subsided after registering. “If the protest does continue, I do believe that I won’t be actively involved in the protest. Although, I don’t oppose to the cause of the protest,” Kananda said.

In an IOL report the Wits Senior Communications Officer Buhle Zuma said, “The South African Police Service will continue to be on campus until we are confident there are no threats to lives, the academic calendar and/or university property.”
SAPS Spokesperson Brigadier Sally de Beer told Wits Vuvuzela that, “The South African Police Service has an operational plan in place and we are giving effect to that plan. We are monitoring processes at some campuses to ensure safety and security.”