Wits Rugby team starts the season with a muddy loss

The Wits Rugby team hosted the opening game of the Wits Varsity cup.

The Wits Rugby team lost to the University of Free State (UFS) in the opening game of the FNB Varsity Cup on Monday, January 30.

UFS won the match with 26 points against 21 for Wits after a muddy standoff on rain-soaked fields at the Wits rugby stadium. Wits took an early lead, encouraging the visitors to produce a powerful retaliation.

Although displeased with the outcome of Monday’s game, the team is looking forward to taking the lessons learnt from the difficult game forward. “We’re obviously disappointed at the result because we believed we could win but it was a gutsy performance from the team, they showed a lot of heart,” said Team Captain Warren Gilbert.

The trying weather conditions were an obvious challenge to both teams who persevered through the game which looked as if it could go either way.

“We just have to be better on execution,” said Wits Head Coach Hugo Van As who remains enthusiastic about the season and expressed his pride in the team which he described as “young and still in the building process”. 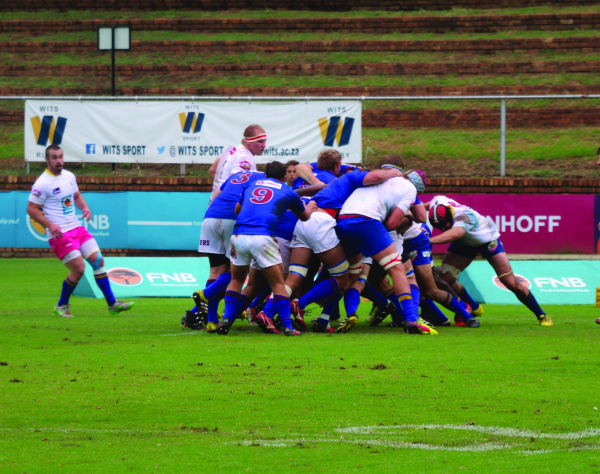 TOUGH BATTLE: The Wits rugby team fought till the end.

Witsies came out in numbers to back their boytjies, despite the rainy weather which threatened to dampen the mood over the first game of the FNB Varsity Cup season. The audiences cheered in support of their players in the festive atmosphere where they were entertained by presenters from Voice of WitsFM and the sounds of popular Dj duo, Twins On Decks.

“The team is appreciative of the support,” said Coach Van As who is ready to prepare for the next game, away to the University of Stellenbosch, on February 6. Captain Gilbert shares the sentiment, saying that the Varisty Cup is a long journey and they will not be deterred by one loss. “We will take a day to mourn the loss and then get back to our job,” said Gilbert.

At the end of the first day of the Varsity Cup, Nelson Mandela Metropolitan University topped the log, after beating the University of Cape Town 36 – 8.

Wits Vuvuzela, The Tigers come back for seconds in Varsity Cup final, April 9, 2014