A FORMER Witsie is making moves towards her dream of competing across the globe after achieving gold in the paracycling national championships held earlier this month. 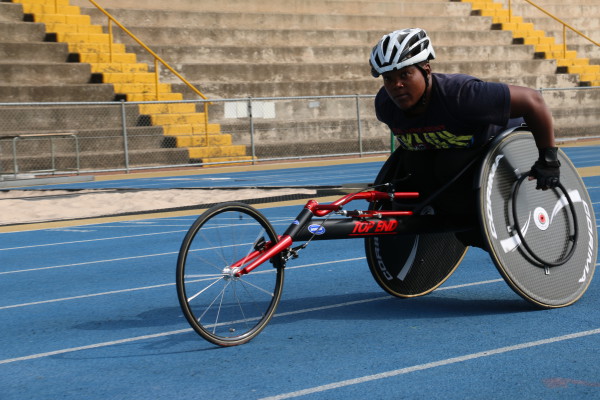 Palesa “Deejay” Manaleng (29) works as an online journalist and describes herself as an author, poet, professional cyclist and athlete.
A paraplegic athlete and cyclist, Manaleng was involved in a nearly fatal cycling accident that resulted in being paralysed from the waist down.
“It was a huge adjustment from cycling and running with my legs to now using my arms. It can be strenuous at times,” says Manaleng.
“I have taken part in sports my entire life, there isn’t a time in my life where I was not taking part in some sort of sports,” she says.
“Since then I have proven to myself that I am strong and I can do and be anything I want to,” she says.
She found her love for cycling on the open road in June 2013. Manaleng says there is a freedom in being on the road especially with the “speed and intensity” that cycling brings.
With her dreams to be “great” through participating in the national track championship 2017, Manaleng finds herself training tirelessly for close to 15 hours a week. She is coached by boxing and now track coach Boetie Lourens and they have been training together for a couple of months.
Manaleng trains five times a week, with a busy schedule that involves cycling, boxing and track. During Manaleng’s training session, Lourens told Wits Vuvuzela he admires Manaleng’s determination for the sport especially as a paraplegic athlete.
“This lady is committed. She comes home in the morning, she sleeps two hours and then she comes to the tracking ground,” says Lourens.
“You can ask her if she is okay? At times I can see she is tired but she will be training. She won’t give up and she can go far,” Lourens says.
One of the challenges that Deejay faces in her sporting career is finances. “Finances are a huge obstacle in my sports because I need money to go compete, to buy equipment, eat properly,” says Manaleng.
Finding sponsors is key to getting further as a paraplegic athlete. Deejay explains how she has managed to get some sponsorship. “I find sponsorship through emailing companies. Because I don’t have connections and I don’t have a rich daddy,” laughs Manaleng.
“So I just would look at companies on the JSE list and get into contact with them, some would say that they couldn’t help because sports is not their thing. Some people didn’t respond, others would say that it wasn’t in their budget but SAB (SA Breweries) responded last year. That is how I got my track chair,” Manaleng says.
It has taken her only three years to build up to winning gold in paracycling. Her motto has helped her achieve this. Deejay lives by the words of Franklin D. Roosevelt: “There is nothing to fear but fear itself.”

Wits Vuvuzela, Sport for all. September, 2012