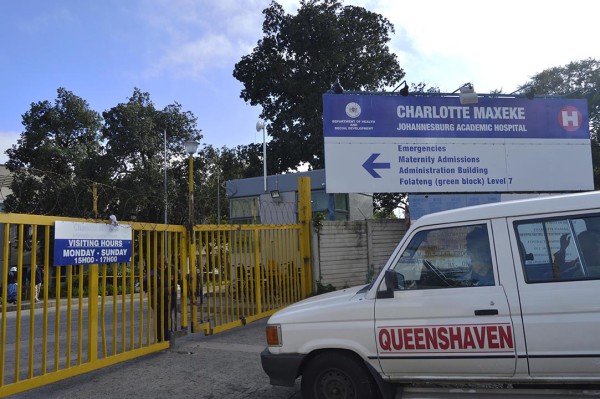 WITS Medical students who do their Health Practice Days and rotation at Charlotte Maxeke Johannesburg Academic Hospital (CMJAH) have identified and voiced their safety concerns and sometimes poor working conditions at the hospital and to Wits Vuvuzela.

Last week, the Charlotte Maxeke Johannesburg Academic Hospital roof collapsed due to structural pressure from the concrete on the roof which ultimately caused it to collapse. This week various medical students expressed their frustration and disappointment at the lack of ownership and action at a managerial level at CMJAH in addressing issues raised by the students.

A 5th year medical student who asked not to be named confirmed that the working conditions at CMJAH are not always adequate for them to do their practicals as required. She said, “[There are] a lack of resources (for example gloves that don’t fit, not enough soap or roller paper to dry out hands) is frustrating and equipment that’s in disrepair (for example hospital beds or blood pressure machines) is disappointing.”

The students said, “And while often we can compensate in some way it’s frustrating to know patients may not be receiving the highest level of care possible because of simple managerial issues. The hospital is in disrepair. It’s been neglected. No one is available to be held accountable and no one ever accepts responsibility. Most of our teachers (the doctors) try solve issues as best they can but issues of infrastructure require a level of resource and authority they don’t have.”

The student also expressed her concerns about their safety while working at CMJAH saying, “In terms of health and welfare, the environment is not safe. Patients with infectious TB are not always in isolation or wearing respirator masks because of resource mismanagement. In terms of infrastructure, leaking roofs, inadequate ventilation, poor temperature management and the faulty elevators are some examples contributing to our decreased safety.”

Another student studying dentistry, who also asked not to be named, echoed her colleague’s sentiments. She said, “The working conditions are pretty average. Things such as the equipment that we use on patients, the lights, the machines etc. aren’t always working or there is a shortage, but when they do, it’s okay. Until recently it has been a relatively safe and well-equipped environment to work in.”

Despite the average working conditions and safety concerns, the students said the hospital is a great learning opportunity. Fourth year medical student Sivan Elad said, “I thoroughly enjoyed my experience at the hospital. There are amazing programmes in place for students.”

All the students approached by Wits Vuvuzela confirmed CMJAH is a “friendly environment to work in”. They have had positive experiences however sometimes the level of bureaucracy at CMJAH leaves the students complaints falling on deaf ears.