Little snooze for the giants of the wild

Sleep may be a hard thing to come by for our four-legged giants of the wild according to Wits professor.

Poor elephants! They only get by on two hours’ sleep every day.

This is the finding of a study conducted by Prof Paul Manger, Dr Nadine Gravett and Dr Adhil Bhagwandin, from Wits University’s School of Anatomical Sciences, in collaboration with scientists from the University of California‚ Los Angeles and the non-governmental organisation, Elephants Without Borders. 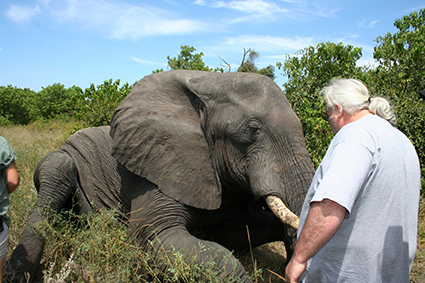 POWER NAP: Elephants only get an average of two hours sleep
Photo: Provided

The study, conducted on two adult female elephants at the Chobe National Park in Botswana, found that this average sleeping time is the shortest sleeping period of any mammal in the animal kingdom.

The research, published in the scientific journal, PLOS ONE, used an actiwatch, similar to a Fitbit, which was developed to study sleep and sleep disorders in humans in the most minimally invasive way. This remote monitoring device was implanted just under the skin of the elephants’ trunk – which supports a lot of the animal’s movement – where it would stay for 30 days.

The findings showed that lack of sleep in elephants can be attributed to the need for food. Since the elephant is a significantly large mammal, it would need to put “about 300kg” of food in its mouth daily. According to Manger, the large amount of food that the body needs leaves little room for sleep.

During the period that the elephants were being studied, one went for two nights without sleeping at all, while the other stayed awake for three nights. “On the nights that they weren’t sleeping they would be hiking about 30 kilometers which is about 10 hours,” said Manger. According to the researchers this could be due to animal predation, possibly poaching or bull elephant musth.

Eight postgraduate students from Manger’s lab joined the study in order to gain more experience in the field. Illke Philander, currently doing her PhD in comparative neurobiology at Wits, describes the experience as invaluable.

“The scale of the study and working with Professor Manger brought so much into perspective for me, with regards to my own academic career,” said Philander.