Wits Journalism launched its 2015/2016 State of The Newsroom report.

This emerged at the launch, on Tuesday, April 4, of The State of the Newsroom 2015/16, a report by the Wits Journalism department on the country’s media landscape. The report, said the department’s head, Prof Franz Kruger, covered economic pressures impacting the newsroom, transformation issues and management interference affecting the editorial process.

Editors need to consider the economic constraints that affect their newsroom without compromising the quality and integrity of their work, said Mahlatsi Gallens, the South African Editors Forum (Sanef) chairperson. She emphasised the importance of editorial independence and the continual need to fight for media freedom, saying journalists needed to produce work without fear or favour. “We will continue to protect our freedoms and tell the South African stories,” Gallens said.

Katy Katopodis, Eyewitness News (EWN) editor-in-chief and Sanef deputy chairperson, asked what constituted “editorial interference”, to which Kruger said that there was a need for Sanef to clearly define the meaning of management interference.

Adjunct professor in the journalism department, Mathatha Tsedu, said the report did not seek to provide definite answers but rather to contribute to the conversation of how to deal with the challenges that many journalists and editors face in the newsroom about producing quality and independent content. 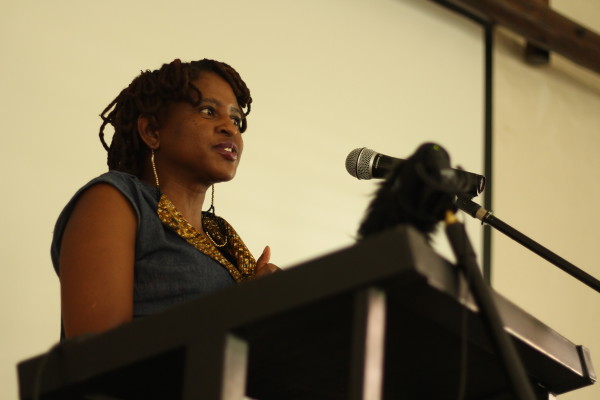 Mahlatse Gallens, Sanef chairperson, at the launch of the State of the Newsroom research report at Wits University today. Photo: Chante Schatz.

A question was raised about the challenges of fake news and how audiences are finding it difficult to differentiate between news and fake news. Dr  Glenda Daniels, a Media Studies lecturer at Wits, in reference to ANN7, said a news channel should not be presenting public officials that are “looting and telling lies” as legitimate.

“We should be vigilant about legitimate news channels,” Daniels said. “If it is created deliberately, is it news?”

Such challenges are difficult to resolve, concluded Tsedu, who acknowledged the increased fragmentation within the media industry in South Africa.

The full report can be downloaded here.