Rowing their way to success 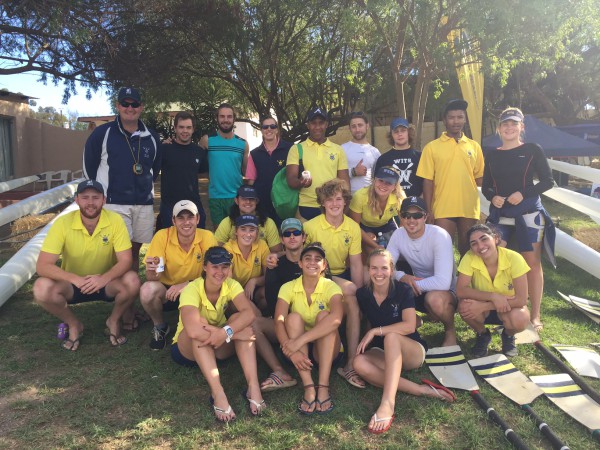 READY, SET, GO!: All smiles as the WUBC team prepare for the regatta.
Photo: Provided

THE WITS University Boat Club (WUBC) excelled at the University Sports South Africa (USSA) national rowing regatta at the Misverstand Dam in the Western Cape from March 31 to April 1.

Novice Yuval Belisha, one of 21 Wits participants, placed first in the men’s sculls D final. While the men’s captain Jordan Jackson made it into the A sculls finals and ended up 5th. Jade Crooks and Tegan Kervaar fi nished in third in the women’s A pair race. The duo earned themselves spots on the ladies grudge four and double team alongside WUBC member Rosanne Bentley. Emily Makhoulf also advanced into the fi nals of the women’s B sculls and placed 5thoverall in the final.

There were more winners on the 2nd day of the regatta with Robert Basson coming 2nd and Tholang Cossa placing 3rd in the men’s C sculls final. WUBC chairperson, Kirstyn Lloyd said, “These crews (the grudge teams) are made up of the best athletes based on their performances throughout the regatta and on the ergo leading up to the regatta”. Hosted by the University of Cape Town, the competition attracted a number of athletes from universities across the country.

Lloyd said she is very proud of what the athletes achieved and added that the team is preparing for the Gauteng Champs at the Roodaplaat Dam on April 8.